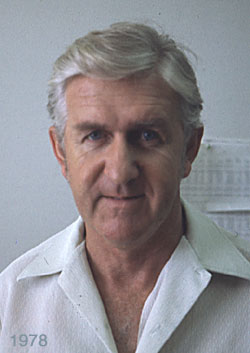 For a short time he was in the Public Service of New South Wales before serving in the army and the air force during World War II.  After the war he attended Sydney University under the Commonwealth Reconstruction Training Scheme and graduated with honours in botany.  He joined the Forestry and Timber Bureau in 1951 and worked for some years in association with Norman Hall on the development of punched card systems for identification of eucalypts and dicotyledon families.  (Field Identification of Eucalypts, Unasylva 8 (1953), Field Identification of Dicotyledons, Aust. J. Bot. 3 (1955).)

In 1957 Hall and Johnston produced the first edition of Forest Trees of Australia, and Johnston also shared with G. M. Chippendale the authorship of Eucalypts, illustrated by S. Kelly (1969).  In 1965 Johnston and Marryatt produced Taxonomy and Nomenclature of Eucalypts, a publication of the Forestry and Timber Bureau.

Dr Johnston has been interested in the effect of local site factors in the distribution of eucalypts. In addition to extensive field work for the first edition of Forest Trees of Australia and other collecting he made a major collection of the grey gum group in 1965-66.
The Bureau's research activities were mainly concentrated in the Forest Research Institute which, in 1975, formed the basis of the Division of Forest Research, CSIRO.