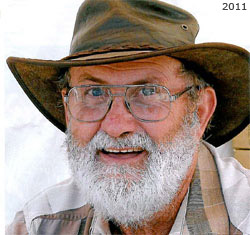 [In October 2001, David Jones was presented with the Australian Orchid Foundation's prestigious "Award of Honour" for recognition of his enormous contribution to orchids in Australia and internationally. Previous recipients include such illustrious names as Alick Dockrill, Gerald McCraith, Hermon Slade, Wal Upton and Len Lawler. What follows is an edited version of the successful nomination that was compiled by Mark Clements, Gerald McCraith and Helen Richards, which was passed unanimously by the ten independent referees appointed by the directors of the AOF.]

David Lloyd Jones was born in Victoria in 1944 and has had a deep interest in Australian flora including orchids since his boyhood. He attended Burnley Horticultural College where he obtained his Diploma of Horticulture, being dux of the college in his final year. He went on to Melbourne University, graduating with a Bachelor of Agricultural Science degree. He was employed as a professional horticulturalist by the Victorian Department of Agriculture at the Knoxfield Horticultural Research Institute for 14 years. There he was instrumental in implementing many innovative programs in the study of Australian plants, especially in relation to their nutrient requirements.

His extensive knowledge of orchids was recognised when in 1968 he was asked to co-edit, with Mr Bruce Muir, the publication by Thomas Nelson (Australia) Ltd of the complete collection of W.H. Nicholls' water-colours and manuscripts, resulting in the publication of Orchids of Australia in time for the World Orchid Conference held in Sydney in 1969. Around this time he became deeply involved in the study of the pollination of native orchids.

In 1968, the Victorian Group of the Australasian Native Orchid Society was formed. David was a foundation member and foundation committee member. He was later honoured with life-membership.

David and his wife, Barbara (who also obtained her Diploma of Horticulture at Burnley) opened a nursery called 'Geewan Ferns', adjacent to the large Australian plants nursery 'Austraflora' at Montrose, where they propagated and sold A.ustralian ferns and orchids during the late 1960s and into the 1970s.

[n 1973, David described his first orchid, Corybas hispidus, publishing it in the Victorian Naturalist. The family moved to the Currumbin Valley area of south Queensland in 1978, where they established a nursery, supplying plants to the Gold Coast for many years. During this time, David continued studying orchids, making contact with many of the local enthusiasts and searching the countryside with them. By then he was becoming a prolific author of books on many subjects relating to plants. Native Orchids of Australia, a major reference book on all known species at that time was published in 1988.

In 1987, David and family moved to Canberra where he took up the position of Horticultural Research Officer in the research section of the Australian National Botanic Gardens. After a year during which time he evaluated the viability of the 40 or more horticultural projects being undertaken at the ANBG, he approached management and proposed a change of direction for him, namely to refocus his research on the taxonomy of various Australian plant groups, but particularly orchids.

With official approval, David set about expanding areas of research into orchids by undertaking field work and focusing on the collection of particular groups in need of study, increasing the National Herbarium reference collection of orchids and introducing new techniques necessary for the study of these plants. These included the floral dissection cards, facilitating the general understanding and recording of the biodiversity of the Australian orchid flora. A significant part of his work involved the setting up of a network of professional and amateur botanists throughout Australia with whom he set up a liaison in order to obtain additional fresh orchid material for study. By this means he significantly expanded and sped up the process of searching and studying orchids throughout the country. In addition to receiving and identifying many new species of orchids, David undertook the botanical drawing of many of these plants and now has in excess of 2000 illustrations.

Many of these have been used in the description of new species and in various other botanical publications.

As a direct result of his work and the publication of various articles on Australian orchids, David has been invited by other professional botanists to be involved in many cooperative projects throughout Australia. These include:

Since his arrival in Canberra, firstly at the ANBG until 1994 and then as a Research Scientist in the Orchid Research Group at the Centre for Plant Biodiversity Research (a cooperative between the ANBG jEnvironment Australia Department and Plant Industry, CSIRO), David has undertaken numerous field trips to study orchids first hand as well as to collect material for research. On many occasions, he has undertaken one-day trips or sometimes trips for several days to specifically obtain fresh material of a particular species or group of orchids. His energy, experience and ability in the field are astounding. Areas where he has undertaken field trips include: Australian Capital Territory, Tasmania (most of the state), Victoria (most of the state) Kangaroo Island, Eyre and York Peninsula, the Flinders Ranges, southeast of South Australia, much of the eastern half of New South Wales, the south west of Western Australia and much of eastern and north eastern Queensland. Additionally, he has travelled overseas to Christchurch, New Zeala/)d, New Caledonia, and the Torricelli Mountains in Papua New Guinea.

Since commencement of his research on orchids in Canberra, David has recognised, described, named, renamed and illustrated over 300 species and several genera of orchids, both separately and in conjunction with various colleagues. He has taken us to a new level of understanding of the Australian orchid flora, having contributed directly or indirectly to the recognition of over 1300 species in Australia (many yet to be described) effectively doubling the number recognised before he started in 1986.

Finally, colleague Mark Clements comments on his association with David.

"I have known and worked with David Jones for the past 25 years. David first came to my attention during my formative years back in South Australia. In 1969, the family was given a copy of Orchids of Australia by W.H. Nicholls, edited by Bruce Muir and David Jones. It was during an Australian Orchid Foundation meeting held at the then Canberra Botanic Gardens in 1975, that I first met David and we have been good friends and colleagues ever since.

"David Jones is without doubt one of the outstanding botanists of our time. His generalist knowledge in horticulture and field experience of Australian plants, plant communities and associated natural history is second to none in this country and the like of which we may never see again. This knowledge is not just confined to Australian plants, with his interests extending world wide to groups such as cycads, ferns and bulbous plants providing a basis for the publication of numerous extremely well researched and presented reference books (over 25) on a whole range of subjects. It is however the study of orchids, particularly Australian species, where David has excelled and made an immense contribution. His knowledge and understanding of the subject is astounding. Despite working closely with David over the past 15 years, his knowledge and work on these plants never ceases to amaze me.

"His overall contribution to the general knowledge of Australian orchids may never be equalled or surpassed."

Congratulations David, on behalf of all the members of the Australasian Native Orchid Society.