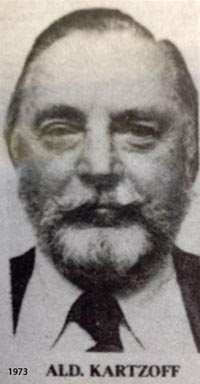 Michael's youth was spent in Italy. He had barely matriculated in Naples University when the Fascist National Party declared Italy's Fascist state to be totalitarian. He made a decision to leave Europe and arrived in Australia in 1926.

He completed the two-year course for the New South Wales Certificate of Agriculture at the Bathurst Experiment Farm.  For a time he worked as a jackeroo in the northwest of the State and during the depression years (1931-35) prospected for gold in the Araluen district (the locality of Eucalyptus kartzoffiana). He was employed by the Forestry Commission of New South Wales in 1940 but soon saw service in the A.I.F. in Palestine and Syria (1940-45) during World War II. He was a regimental police sergeant of a 9th division A.I.F. battalion in Syria as a war correspondent. His knowledge of 5 languages became handy.

In 1946 he was appointed a seed collector under W.A.W. de Beuzeville, and until 1953 travelled all over the State on seed collection and making ecological observations.  Later he held positions as Forester, and apart from district work was in the Fire Control Section of the Commission (1958-66), Extension Officer (1966-72) and then District Forester, Dubbo, and relieving District Forester, Metropolitan. After his retirement in 1973 he became a consultant on the environment and on arboriculture.

In later life he became an alderman, and Mayor, for the Kuringai City Council (alderman till 1987).

In 1973 he was honored in the naming of Eucalyptus kartzoffiana by L.A.S. Jonson and D.F.Blaxell.

In 1977 Michael Kartzoff was honored by Australia and received a Medal of Order of Australia for community service. He died on 22 December 1987.

In addition to internal papers for the Commission he published Nature and a City, the Vegetation of the Sydney Area (1969), which was recommended reading on some courses at the University of Sydney and prescribed for the Town Planning Certificate.