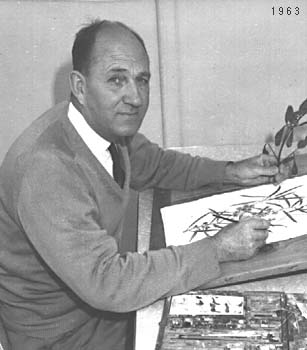 Australia lost a great ambassador for natural history in the passing of Stan Kelly O.A.M. on the 30 April 2001, aged 89 years.

Stan received an Order of Australia Medal in 1980 in recognition of his service to the community through his paintings and lectures and the influence they had on the growing and appreciation of Australian plants throughout Australia.

Outside of his, home town of Ararat, Stan Kelly was best known for his painting of botanical subjects particularly the eucalypts through his books. His first book 40 Australian Eucalypts in Colour was published in 1949 and later Eucalypts Volume I & II were published featuring his paintings. The illustrations in these books give an indication of his artistic talent that extended beyond botanical works. Painting was one of his great loves and he always went home from SGAP (as it was then) meetings armed with specimens to paint and to share with his painting class. People who have attended the Grampians Group flower show may remember seeing Stan's stunning fungi paintings displayed on the walls of the hall. A set of cards featuring his fungi paintings has been produced for sale by Amnesty International.

He was a life member of the APS Grampians Group and the Ararat and District Field Naturalists Club. He was a foundation member of the latter. He was the teacher of a painting class for many years and this class continues to meet weekly although Start had not been well enough to attend for some time.

Stan had a great enthusiasm for life. He readily admired other peoples' talents and took a keen interest in the world around him. He was a lover of nature, an avid reader, a prospector, a keen fisherman and an articulate teller of stories.

A walk in the bush with Stan was always a delight! His enthusiasm, his knowledge, his appreciation of simple beauty and his stories - these are the memories that will stay with those of us fortunate enough to have shared trips in the bush with him

Start Kelly was truly one of nature's gentlemen and will be fondly remembered by all who knew him. He is survived by his wife Bertha, son Anthony, daughter Sherry, 8 grandchildren and 4 great-grand children.