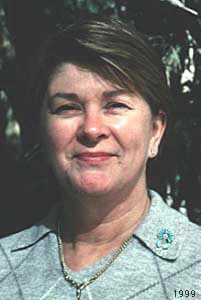 All her academic qualifications were obtained in Melbourne, Vic. In 1987 she held the position of Reader in the School of Botany, University of Melbourne. She is a Fellow of the Willi Hennig Society and a Member of the Roy. Soc. of Vic., the Ecol. Soc. of Aust., and the Aust. Syst. Botany Society.

Dr Ladiges has published extensively and in many papers has collaborated with other people. A large number of papers have been connected with species of Eucalyptus and published in Aust. J. Bot. Additional to systematic description of new species, she is also interested in:

Since 1992 she has been the Head of the School of Botany, The University of Melbourne. Professor Ladiges was appointed to a “Personal Chair” at the University of Melbourne in recognition of her scientific discoveries and leadership within the university. She has published more than 120 scientific articles in refereed journals of international standing, published eight book chapters, edited four special volumes, coauthored two biology textbooks for secondary education, and coedited and coauthored the first substantial Australian biology textbook used in tertiary institutions. These three books have won prizes for Best Australian Textbook and Awards for Excellence in Australian Publishing. Her research is in the field of plant ecology (predominantly 1974-1982) and phylogenetic systematics and historical biogeography (1983- present). She studies the evolutionary relationships and history of the Australian flora, particularly in relation to the botanical differentiation of geographic areas during the geological history of the continent. Lately Professor Ladiges and her research group have been elucidating the phylogeny of large Australian plant genera, including the eucalypts and acacias using molecular (DNA) and morphological techniques.

Pauline’s distinguished career has been recognised by a number of awards which include: Elected Fellow Australian Academy • of Science (2002) • Awarded Royal Society of Victoria 2005 Research Medal (biological sciences, nonhuman) • Awarded Australian Centenary Medal (2003) She has taught and trained what can only be described as a very large number of students over the years. Her students can be found working professionally in all states of Australia and in many institutions overseas.


Source: Extracted from: Hall, N. (1992), Supplement No. 3 to 'Botanists of the eucalypts - 1978'. Commonwealth Scientific and Industrial Research Organisation, Melbourne.
University of Melbourne, School of Botany website 2008. ASBS Newsletter No.137 December 2008.