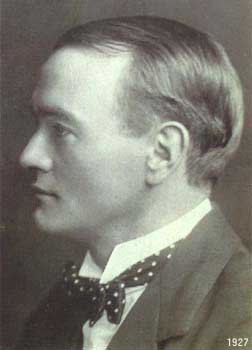 Arguably Australia’s most famous forester, Charles Lane Poole introduced systematic, science-based forestry to Western Australia and made the first thorough inspection of Papua and New Guinea forests. He was the Commonwealth’s first Inspector-General of Forests and trained many of Australia’s professional foresters at the Australian Forestry School in Canberra.

Charles Lane Poole was born in 1885 into a well-connected English academic family. He started studying engineering in Dublin, but lost his left hand in a shooting accident when he was 19. Instead of continuing with engineering, he secured a place at the prestigious French National Forestry School, L’École Nationale des Eaux et Forêts. He graduated in 1906 and was sent to South Africa, where he was made a district forester in the Transvaal Province at only 22 years of age. He worked hard there to restore its depleted forests, but disagreed with the government’s policies and resigned. It was not the last time he would disagree with his government employers.

The Colonial Office then sent him to Sierra Leone on Africa’s ‘ Fever Coast’. His small field notebooks, now held in the National Library of Australia, give a picture of his work there. With little help and in spite of bouts of malaria, he drafted forest legislation, set up the first Forestry Department, laid out the first forest reserves, established nurseries, plantations and an arboretum, and collected herbarium specimens, some of which were new to science.

While on leave in 1911, Charles married Irish-born Ruth Pollexfen (who in later years designed the interiors of the Lodge and the Governor-General’s residence in Canberra). She did not return with him to Sierra Leone. Charles did not believe that the tropics were ‘places for white women’. The couple spent many of the early years of their marriage on opposite sides of the world.

Following his stint in Africa, Charles Lane Poole came to Australia in 1916 to take up a role as Western Australia’s Conservator of Forests, in which he was charged with putting forestry on a proper footing. It was a step up in his career, and it enabled him to set up home with his wife and daughter for the first time. State archives, parliamentary papers and debates, and published reports tell of five years of intense activity. He drafted a new Forests Act and saw it passed in the face of strong opposition from the timber industry and unions. He reorganised the Forestry Department, started long-term planning for sustained timber yields, established arboretums and arranged for herbarium specimens to be collected across the state. Nationally, he argued that Australia should set up its own school to train forest officers – he never imagined that he would be called to run it – and internationally he took a prominent part in the First British Empire Forestry Conference held in London in 1920.

In 1921, Charles abruptly ended his flourishing and energetic career in Western Australia. The State Government would neither heed his advice against renewing forest concessions to a timber company, nor would it declare the state forests he wanted. He resigned in protest. Ruth returned to her home country of Ireland with their two daughters.

Charles needed new employment. Aware of his availability, the Australian timber industry pressed the Commonwealth to have the resources in Papua examined to see if they could be profitably exploited. Charles was offered the job and began 24 years of work for the Commonwealth, which left a legacy of records in the National Archives. Charles Lane Poole: forester for a nation NAA : A3087, 1 His task was to survey the forests of Papua, then an Australian territory, and later those in New Guinea. He spent an arduous three years traversing the forests from the swamps to the high mountains, surveying the country, measuring trees, and collecting herbarium specimens and timber samples. He did not find extensive stands of timber that could be exploited economically, but took broad-ranging notes of other forest products such as resins, nuts, oils and medicinal plants. His youngest daughter was born in Ireland while Charles was in Papua.

The Western Australian Senator, George Pearce, put a case to Prime Minister Stanley Bruce that the Commonwealth needed its own forester, and recommended Charles Lane Poole as the best man for the job. Charles was appointed the Commonwealth’s Forestry Adviser in 1925.

He led the Commonwealth Government’s involvement in forestry through the Depression of the 1930s and World War II , but never had adequate funds or staff. He also found it extremely difficult to build cooperative relationships with the states at a sensitive time in Commonwealth–state relations. Charles’ insistence on university level training for forest officers in the Australian Forestry School, his intolerance of state counterparts without such qualifications and, at times, his abrasive manner, polarised opinions about him. He even referred to one of his state counterparts as ‘Australian forestry’s enemy No. 1’. In 1928 he submitted a case to the Royal Commission on the Constitution that Australia’s forests should be a national, rather than a state, responsibility. Needless to say, this did nothing to endear him to his state counterparts.

Despite these difficulties, Charles energetically pursued his vision for a national approach to forest management. He was far-sighted and realised that uncontrolled grazing in the mountain catchments of the Murray River was causing erosion that might silt up the new Hume Reservoir on the river near Albury. A reconnaissance survey was needed, but it was not until 1931 that Charles could get a research officer, Baldur Byles, to do the work on a shoestring budget, and then only on the New South Wales side, as Victoria would not agree.

The picture that emerges from archives in Australia, Ireland and France, and from discussions with those who knew him, is that of an energetic, committed and sometimes controversial man. His interest in forestry took him around the world and his zealous principles at times brought him into conflict with employers and colleagues. His commitment to the cause of scientific forestry and the conservation of forest resources has ensured his place in the history of Australian forestry.

Records relating to Charles and Ruth Lane Poole are also available on the National Archives of Australia's "Uncommon Lives" website.