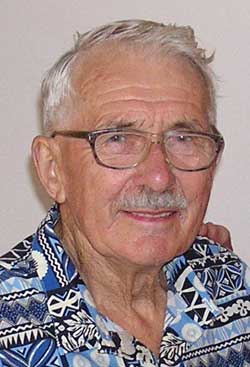 Laurence was born in Victoria in 1917, managed the family farm for 18 years following the death of his father, whilst Laurence was only 15. Laurence devoted his life to arboriculture, perusing his passion for plants. Married with one son and two valued grandchildren, he devoted much of his life to unpaid efforts supporting various community good causes.

A special interest was the improvement of the environment by raising the level of fertility on farms and planting of suitable trees.

He was a foundation member of the Australian Plant Society and the honorary spokesman in the Illawarra for the Forest Protection Society, whose vision is for our forests to be professionally managed on a sustained yield basis, instead of importing timber and newsprint from overseas.

He founded the Australian Seed Company for that purpose in 1957 and was responsible for establishment of huge areas of new plantations in Australia and along our roads, specialising in eucalypts. It was still supplying seeds for overseas and for this country's afforestation in 2007.

Leaving the farm, he was involved in research in the UK and the ACT before setting up the export firm located at Robertson. That town gained from Laurence's planting of its most attractive street trees where he was the honorary secretary of the Robertson Primary School Forest Trust for 30 years which raised about $25,000 for the Primary School. Today, that is becoming an unusual tourist attraction for its 5 acres of Californian Redwoods, the idea of the forest began as the brain-child of the late Mrs Jocelyn Squire.

Robertson also benefited from the knowledge gained during his frequent visits to all Australian states, with special interest in rarer seeds not available elsewhere. The world was circumnavigated twice, there were environmental restorations in China and Vietnam, the Floralies Exhibition s trees in Belgium to be judged, the new Zoo in San Diego to be supplied with Australian seeds, the first cut-and- carry Christmas Tree far in Australia offering superior Douglas Fir trees, rather than Radiata Pine.

Retired to the Illawarra in 1987, there were Garden Clubs to support, Shows and gardens to judge, the headlands of Port Kembla and the beautification of the main street of Oak Flats shopping centre to get involved in, study of the modern means of fighting forest fires in America from lake Tahoe.

Laurence was for over 2 years the Gardening columnist of the Wollongong Advertiser.

He was honoured in the name Eucalyptus langleyi, known as Green Mallee Ash, Nowra Mallee or Albatross Mallee, published by Johnson & Blaxell in 1991.