Mike was born to Greek parents, one of 9 children. The family remained close for their entire lives.
He was raised on a sugar cane farm in Bambaroo, S of Ingham, from ages 3-12, during the Depression years of the 1930's.

From 1944 to 1947, he attended Gatton Agricultural College, Queensland, as a boarding junior and Diploma student, after previously leaving school at 14 to help support the family. Here Mike first pressed and identified herbarium specimens of grasses for the Agriculture subject, and he also enjoyed the 'Engineering' subject. After Gatton, he spent 15 months on brothers' cane farms gaining more experience in mechanics, and the ability to work long hours in hot humid conditions, which stood him in good stead in the next phase of his life.

On 4 April 1949, he was appointed to CSIR (the Commonwealth Council for Scientific and Industrial Research), working under Ray Perry as Botanical Assistant in the Northern Australian Regional Survey section (later the CSIRO Division of Land Use Research after the first five of eight name changes). Several years were spent undertaking lengthy field surveys in outback WA, NT, Queensland and SA, often working closely with other specialists, with shorter trips undertaken during wet seasons.

Mike collected many high quality herbarium specimens during the Land Research Surveys and later during field work for the CSIRO Division of Plant Industry, to which Mike and the Land Research herbarium were transferred in 1973. Between field surveys, he had already applied his talents and energy to the study of grass taxonomy, completing a Master of Science revising the tribe Chlorideae in 1967, with studies at Leicester University under Professor Tutin, following a year as ABLO in 1965/66. In 1970 Mike was awarded a SEATO fellowship and a Smithsonian Institution grant which supported travel for, and studies in, SE Asian and Sri Lankan grasses. These yielded over 200 collections now held in CANB, and later treatments of 82 species in 35 genera in Flora of Ceylon. Other grants from ABRS and ANPWS enabled him to collect specimens and further his expertise in the Kimberley region, Kakadu National Park, and Uluru - Kata Tjuta National Park. His last two field trips were to Uluru - Kata Tjuta in 1988 with Jo Palmer, documenting the floristic composition and condition of the National Park at that time. They provided sets of over 550 specimens covering 64 plant families and 379 taxa, one each for CANB and the Uluru reference herbarium, with labels including detailed habitat descriptions and lists of associated species.

Based on records of his specimens in the Australian National Herbarium (CANB) specimen database, Mike participated in 35 surveys and botanical collecting expeditions. One of these was his 2 week honeymoon with wife Margaret on the Percy Isles, SE of Mackay in Queensland, during which he made 108 collections. The total number of Mike's collections is difficult to ascertain, as he shared Ray Perry's collecting number series until July 1954, also collected in teams with special number series, and some of his overseas collections are probably not yet databased, but label details from over 6,200 collections covering over 2,500 different taxa were in the CANB specimen database in 2012. Mike wrote informative notes on habit, habitat and abundance for almost every collection, and the quality of the specimens is consistently high. Other botanists have nominated them as types of new species at least 97 times so far.

Five species have been named in his honour, in a variety of families, a reflection of his wide collecting activities.

Over his career Mike identified and described as new to science 126 plant taxa, including 8 new genera. He published 6 books, including one on weeds, 20 scientific journal articles and 40 flora treatments, including many chapters of the grass volumes of the Flora of Australia and many generic treatments (with F. Quinn and J. Palmer) in Flora of the Kimberley Region, published in 1992.

Mike was always willing to provide information and names on grasses for all and sundry. He would readily drop whatever he was doing to assist with any enquiries and mentor younger botanists. At various times over his career, he made loyal and life-long friends with botanists of other countries including those of SE Asia and the Middle East.

He continued to work in the Australian National Herbarium until his formal retirement in February 1993 at age 65, and beyond as an Honorary Research Fellow until 2002, completing authoritative revisions of Eragrostis and Triodia for the Flora of Australia project, and then worked as a volunteer until mid 2011. 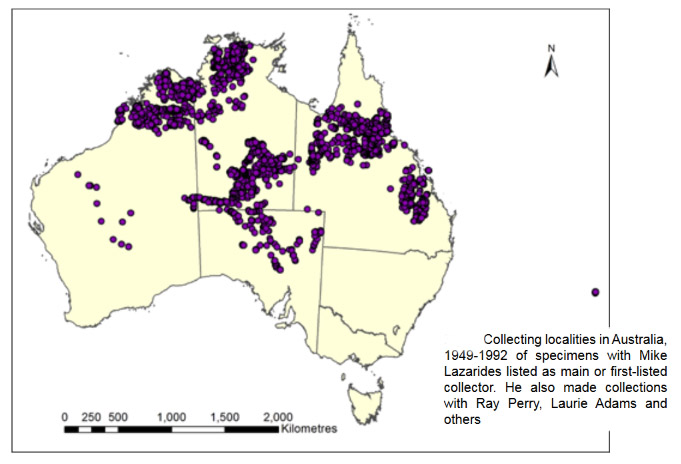