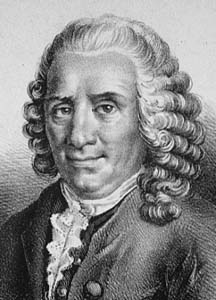 Carolus Linnaeus (or Carl von Linné) was born on May 23 1707, and died on January 10 1778. He was a Swedish scientist who laid the foundations for the modern scheme of taxonomy.

As a boy Linnaeus was to be groomed for life as a churchman, as his father and maternal grandfather were, but he showed little enthusiasm for the profession. His interest in botany, though, impressed a physician from his town and he was sent to study at the university of Lund, transferring to Uppsala after a year.

During this time Linnaeus became convinced that in the stamens and pistils of flowers lay the basis for the classification of plants, and he wrote a short work on the subject that earned him the postion of adjunct professor. In 1732 the Academy of Sciences at Uppsala financed his expedition to explore Lapland, then virtually unknown. The result of this was the Flora Laponica published in 1737.

Thereafter Linnaeus moved to the continent. While in the Netherlands he met Jan Frederik Gronovius and showed him a draft of his work on taxonomy, the Systema Naturae . In it, the unwieldy descriptions used previously - physalis amno ramosissime ramis angulosis glabris foliis dentoserratis - were replaced by the concise and now familiar genus-species names - Physalis angulata - and higher taxa were constructed in a simple and orderly manner.

Linnaeus named taxa in ways that personally struck him as common-sensical; for example, human beings are Homo sapiens "wise man", but he also described a second human species, Homo troglodytes (or Homo nocturnus - "cave-dwelling man" or "nocturnal man"), by which he seems to have meant the only-recently described chimpanzee). The group "mammalia" are named for their breasts because he wanted to encourage women to breast-feed their infants.

In 1739 Linnaeus married Sara Morea, daughter of a physician. He ascended the chair of medicine at Uppsala two years later, soon exchanging it for the chair of Botany. He continued to work on his classifications, extending them to the kingdom of animals and the kingdom of minerals. The last strikes us as somewhat odd, but evolution was still a long time away - and indeed, the Lutheran Linnaeus would have been horrified by it - and so Linnaeus was only attempting a convenient way of categorizing the natural world.

He was knighted in 1755, under his Swedish name, Carl von Linné.

Linnaeus' original botanical garden may still be seen in Uppsala.

Source: This article is licensed under the GNU Free Documentation License and uses material adapted in whole or in part from the Wikipedia article on Carolus Linnaeus .
Portrait source: unknown