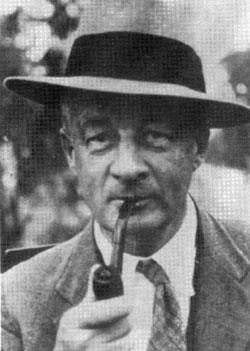 He was born at Heytesbury, Wiltshire, England 24 June 1880, educated at Emwell House, Warminster and died in Brisbane 16 February 1954.

In this milieu, a person of lesser stature might not have produced a huge contribution to science in Mesozoic palaeontology, herpetology and much more, for which he achieved an international reputation.

He reconstructed and named from fossil bone fragments a giant fish-lizard Kronosaurus queenslandicus, the dinosaur Rhoetosaurus brownie and the curious wombat-like mammal Euiyzygoma dunense. He was very well informed on all aspects of natural history, especially herpetology, mammals and spiders.

He was generous and genial to contemporaries, including collectors from overseas. His warm hearted persona unfolded to the general public, where he “established the museum’s authority in Natural Science” through the popular press, and especially as an authoritatively tall white-coated figure with flowing white hair talking to old and young alike in the public galleries.

He was honoured by the Linnean and Zoological Societies of London and twice served as President of the Royal Society of Queensland. He was an active member of the QNC, including holding presidential office. Heber Longman could have selfishly immersed himself in his consuming passion of Natural History but seized a day of opportunity in a culturally-starved community to enthuse thousands who came to respect and admire him. He was a much-loved Brisbane intellectual whose work at the museum and also in the community was highly praised in a Courier-Mail editorial at the time of his passing.