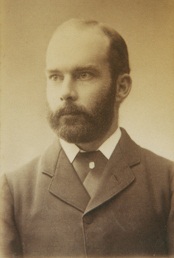 Born at Ostmoorende, Prussia (now Moorende, Jork, Germany) on 12 May 1843; emigrated to Victoria, Australia, arriving on the Ocean of the South on 8 August 1863; died in South Yarra, Melbourne on 18 November 1904.

Luehmann was an excellent botanist, who entirely effaced himself during the lifetime of Mueller, and after that botanist's death began the publication of' "Reliquae Muellerianae" in the first paper of which he modestly stated that he was but dealing with specimens that had been accumulated by his distinguished predecessor. The sentiment does honour to him, and is an illustration of his innate modesty but it is not generally known that for 30 years before Mueller's death he was the latter’s right-hand man, and his services in the building up and critical examination of the National Herbarium, Melbourne, were very great. It would be impossible to write the history of the herbarium without giving Luehmann very great credit. He knew every handwriting on the Iabels, and there died with him a vast amount of valuable information in regard to it, for he had great reluctance to put the results of his knowledge upon paper.

After Mueller's death in 1896, Luehmann succeeded him as Curator of the National Herbarium, Melbourne and later also as Government Botanist of Victoria. Luehmann served in these roles until his own death.