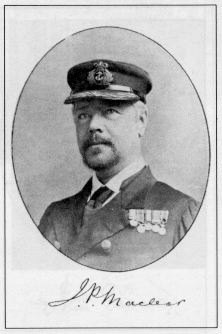 Admiral, son of Sir Thomas Maclear [q. v.], astronomer royal at the Cape of Good Hope, he entered the navy in Sept. 1851 as a cadet on board the Castor, frigate, then bearing the broad pennant of Christopher Wyvill, commodore in command on the Cape station. In her he saw service during the Kaffir war of 1851, and afterwards, as a midshipman of the Algiers, served in the Baltic and in the Black Sea from 1854 to 1856, receiving, the Baltic, Turkish, and Crimean medals, with the clasp for Sevastopol. He passed his examination in July 1857, and served on board the Cyclops in the Red Sea as mate during the outbreak at Jeddah in 1858. On 19 May 1859 he was promoted, to lieutenant, and shortly afterwards appointed to the Sphinx, in which he served on the China station until 1862, being present at several engagements during the second Chinese war, and especially at Taku Forts, for which he received the clasp. In 1863 he went to the Excellent to qualify, as a gunnery lieutenant, and in Feb. 1864, was appointed to the Princess Royal, flagship on the China station. He returned home in her, and in Oct. 1867 was chosen to be first lieutenant of the Octavia, frigate, flagship of Commodore Heath in the East Indies. In her he took part in the, Abyssinian campaign of 1868, earning the medal and his promotion to commander, which was dated 14 Aug. 1868.

In 1872 the Challenger was commissioned by Sir George Nares, with Maclear as his commander, for the voyage of scientific discovery in which the ship went round the world. Returning home in her in 1876, Maclear was on 14 August promoted to captain. In 1879 he succeeded Sir George Nares in command of the Alert, sloop, and remained in her until 1882, completing the survey of the Straits of Magellan. From 1883 to 1887 he commanded the Flying Fish on surveying service, carrying out other valuable scientific work during the same time. On 20 June 1891 he reached flag rank, and two months later retired. He was promoted to vice-admiral on the retired list in 1897, and to admiral in 1903. After leaving the sea, Maclear assisted in the compilation of several volumes of the official sailing directions, especially those for the Eastern Archipelago (1890 and 1893), for the West Coasts of Central America and the United States (1896), for Bering Sea and Alaska (1898), and the 'Arctic Pilot' (vol. ii. 1901 and vol. iii. 1905). He was a fellow of the Royal Geographical and Royal Meteorological societies.

He died from heart failure in an hotel at Niagara on 17 July 1907, and his body was brought to England for burial. He married on 4 June 1878 Julia, sixth daughter of Sir John Frederick William Herschel.