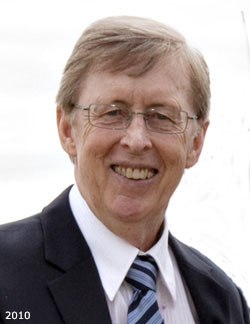 After graduation from the University of Western Australia he joined the staff of the WA State Herbarium as a botanist.
He then served for a short time in Vietnam under Australia's military National Service program.

He then went on to become Australia's authority on the genus Acacia and in the 2000s set out much of his knowledge in the website he maintained "World Wide Wattle". He has collected over a large part of WA with his main interest being the genus Acacia; his papers on acacias are in Nuytsia, commencing from vol. 1 no. 1.

In the latter part of his working life, and in retirement, he resumed his interest in Vietnam and spent extensive time there.

He was appointed Australian Botanical Liaison Officer at Kew for the year 1976/77.

His long and productive career of more than 40 years has involved research on the taxonomy, nomenclature, phylogeny, biogeography, utilisation, phytochemisty, conservation biology, anatomy and botanical history of the iconic genus Acacia.

He has described c. 350 new taxa, as well as revising and recircumscribing many others - work that has involved painstakingly confirming or correcting the identity of a vast number of herbarium coll- ections (>29,400 specimens at the Western Australian Herbarium alone).
He has published more than 180 items, including more than 80 refereed papers and the Flora of Australia account of the genus.

He has also made a substantial con- tribution to efforts to unravel the phylogenetic structure of the genus, work that resulted in the recognition that Acacia, as traditionally circumscribed, consists of five separate monophyletic groups, the largest of which is Australian. He was deeply involved in the process and negotiations which led to the name Acacia being conserved with an Australian type.

As well as this crucial work in providing foundation knowledge of this important genus, Bruce has been innovative and groundbreaking in making his knowledge available to a broader public through the World Wide Wattle website (www.worldwidewattle.com), which he established and manages, and his superb interactive identification guides WATTLE - Acacias of Australia (2001) and Wattles of the Pilbara (2010).

His interests and contributions in Acacia have been wide-ranging, from alpha taxonomy and systematics to conservation, nomenclature and cultural and industrial uses of Acacia species in plantation forestry, reforestation and for firewood, food and chemical production. In this regard, Bruce has been exemplary in the extension of taxonomic research into the government, public and corporate realms.

Bruce Maslin AM retires
Congratulations to Bruce Maslin who in the January 2017 Australia Day Honours List was made a member of the Order of Australia for "significant service to botany, particularly in Western Australia, as a research scientist, and as an author".
This came a month after his retirement was marked at the WA Herbarium in December. After 48 years (1967 - 2015) the habit is too much and Bruce continues on as an Honorary Research Associate at the herbarium whilst continuing to spend much of his time in south- east Asia working on Acacia sens. lat.