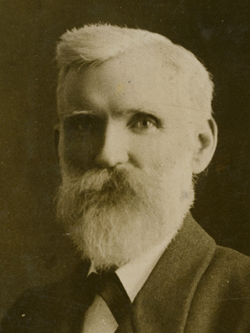 Came to Australia in 1884 as lecturer in biology and botany at Ormond and the Pharmacy Colleges respectively; but his remarkable talent later found expression as Vegetable Pathologist to the Department of Agriculture.

He was undoubtedly the greatest figure in Victorian mycology, publishing about 230 books, bulletins, and pamphlets. Several excellent papers appeared in the Victorian Naturalist, including a "Romance of Plant Pathology", 1910; but McAlpine's masterpiece was the 'Systematic Arrangement of Australian Fungi" in tabular form, 1895. This book probably perpetuated most of Cooke's errors; but it simplified the presentation and gave added information, especially on plant disease fungi and their hosts. The tabulation is still of use to pathologists and is not likely to be superseded. McAlpine's work does not seem to have earned the appreciation it deserves in Australia; even his departmental life was a struggle. Like so many genii, he just retired to fade out of public notice and die in obscurity. I have sifted through periodicals that one would expect to be loud in praising his worth, but the only tribute I can find is in the Australasian Journal of Pharmacy for October and November 1932 (n.s. XIII, pp. 933 and 1037). He was succeeded by C. C. Brittlebank, a very fine pathologist and skilled artist.