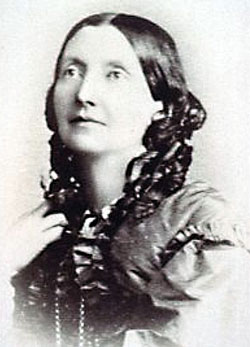 In Louisa Ann Meredith's flower paintings there is an easy blend of science and imagination. She was influential in England in popularising a sentimental interest in the language of flowers.

Born in England, Louisa Ann Twamley, she kept a diary from an early age, and she used this as source material for her books. They included Poems (1835), Romance of nature, or the Flower Seasons Illustrated (1836), Flora's Gems (1839), and Our Wildflowers (1839).

In 1839 she married Charles Meredith who ran sheep in the Murrumbidgee area of New South Wales. The two sailed for Tasmania to join Charles' father at Oyster Bay, where the newly-weds bought a property. Within four years of her arrival she had written Notes and Sketcbes of New South Wales (1844) and My Home in Tasmania (1850). Her descriptions of colonial life were frank. She also wrote fiction and poetry.

Meantime, her husband had lost the money he had invested in New South Wales. He later became a member of the House of Assembly, and held office until 1879 when he resigned because of ill health.

Examples of her artwork:

Born in England, to Thomas Twamley and Louisa Ann née Meredith. Educated by her mother, Louisa published her first book of poems and illustrations in 1835. In 1839, she married Charles Meredith (1811-1880), and they had four sons. The family moved to Tas. in 1840 and lived at 'Springvale' until 1844, Poyston until 1848, and then Swansea.

Louisa was an author and artist, and published books about the natural history of Australia.

She also collected BM and NSW specimens, and specimens of insects and fish.

In 1884, she was granted a pension of £100 a year by the Tas. government for her artistic services to the colony.