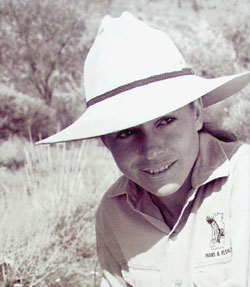 NT Parks and Wildlife Commission Botanist, Carrie Michell died suddenly on the 30th September 2002 at just 31 years of age. Carrie grew up in Katherine on Maud Creek Station, often jogging the 30 plus km home from school rather than take the bus. (This attitude was retained throughout her life, taking some of her coworkers on the most exhausting of explorative botanical walks). Carrie completed a Science Degree at the Northern Territory University, with Honors in Chemistry, then made her way back to Katherine. Here she began her career as a Botanist with the former Department. of Lands, Planning and Environment in July 1994, collecting numerous plants in the Victoria River District whilst undertaking surveys there.

In 1996, Carrie moved to the Northern Territory Herbarium, Darwin, supplying plant samples to AMRAD (Australian Medical Research and Development Corporation) for investigation of pharmaceutical potential. Carrie quickly became the Project Manager. With the Landcruiser, fridge (filled with steaks and iced coffees), maps and botanical references on the front dash Carrie covered most of the NT, exploring the plants and country to all NT borders. Carrie gained a reputation for finding many obscure and overlooked plants due to her persistence and eye for detail. However, the pull of Katherine strengthened and with an opportunity provided by a position jointly funded by the Tropical Savannas CRC and Parks and Wildlife Commission of the NT, Carrie returned to Katherine in 1999. There, she was employed to record the grasses and other plants of the Yinberrie Hills as part of research into the decline of the Gouldian Finch and other granivorous birds. This she accomplished in typical style squeezing every minute of daylight from the day and most if not all the energy from those fortunate enough to volunteer their services to Carrie.

Subsequently, Carrie undertook the task of vegetation mapping for Nitmiluk (Katherine Gorge) National Park. In doing this, Carrie regarded the field botany as the enjoyable part of the project and increased the number of plant species recorded for the Park from 983 to 1379 in just two years. These include many plants previously unknown in the Northern Territory (e.g. Mitrasacme phascoides, Cyperus unioloides and Fimbristylis fimbristyloides) or new to science. It was Carrie’s attention to detail and reluctance to merely apply a name in its broad sense that resulted in many being placed aside awaiting further study or description of new species. Two species have so far been described using her collections as types (Lithomyrtus hypoleuca F.Muell ex N.Snow & Guymer and Glinus sessiliflorus P.S.Short). Her work ethic, meticulousness and love of country inspired all who came in contact with her.

Carrie’s contribution to the botanical knowledge of the Northern Territory is important with over 4500 plant specimens lodged in the NT Herbarium as well as other national and international herbaria. Greater still is the knowledge and friendship that she shared with many of us. Carrie was a warm and genuine person who had a knack of making people feel good about them selves. Her broad smile, good humour and friendship will be sorely missed at DNA. A shrub from the Yinberrie Hills north of Katherine is to be named in her honour.