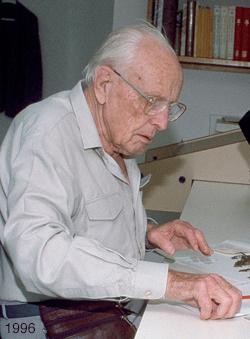 Completed Science Degree at Christchurch in New Zealand before coming to Australia in 1935. Taught at Canberra Grammar School then joined CSIRO Plant Industry in 1943. Undertook extensive ecological surveys and studies, mostly in western NSW. During the course of this work he collected over 9,000 specimens, now housed at the Australian National Herbarium. Retired in 1973 and continued to work at the Australian National Herbarium till the late 1990s.

Ted Moore was born at Dunedin in the South Island of New Zealand and attended Lincoln College, near Christchurch, from which he gained a B.Agr.Sc. in 1933. He moved to Canberra in 1935 and joined CSIR Division of Plant Industry in the early 40s. During the war years Ted worked as a Technical Officer on Taraxacum kok-saghyz from Russia, as a potential source of latex for rubber. Subsequently, in the mid 40s he began to work on the wallaby grasses (Danthonia spp. sens.lat.) in the Agrostology Section of PI. This group included many ecologists who became notable subsequently for their surveys of Australian vegetation and the floristic changes to those vegetation types incurred by continuous grazing. Following that tradition, Ted made his mark early by surveying the vegetation of the southeastern Riverina (see Moore 1953a, 1953b). This project earned him a M.Agr.Sc. degree and promotion to Research Officer status. During the Riverina survey Ted collected many plants for the developing Plant Industry herbarium, then curated by Nancy Burbidge. The quality of those early descriptive papers and the collections he made in the Riverina testify to Ted’s consummate botanical skills and insights into a vegetation that initially must have seemed very strange to a South Island New Zealander !

Ted’s geographical area of interest then moved further north from the Riverina to the Western Division of New South Wales, the area that Noel Beadle had surveyed and mapped some years earlier. This shift northwards was after the time when the former Agrostology Section had changed to become the Ecology Section, with Ted as its Chairman. Ted Moore’s interest in the vegetation of the western region around Cobar developed, especially in relation to the "woody weed" problem that was worsening as a result of the high rainfall levels in the mid 50s. The increasing dominance of shrubs over herbs led to reduced stocking levels and thereby lower income for the region’s graziers. Thus began Ted’s contact with that region and some of its graziers – especially the owners of "Tundulya" at Louth – that was to continue well into his retirement years.

By this time Ted as Chairman of the Ecology Section was as meticulous in his Divisional administrative role as he was in collecting plants. Just as Ted’s botanical interests had widened to include the Western Division of New South Wales so too were the research interests of the Ecology Section changing and widening. The earlier concentration on vegetation surveys was replaced by increasing interest in weedy species and their control, such as bracken (John Carnahan), oxalis, thistles and barnyard grass (Peter Michael) and skeleton weed (Donald McVean and Richard Groves), as well as an interest in water stress in eucalyptus forests (Eddie Pook) and, increasingly, aspects of land use in the upper Shoalhaven catchment as they related to water yield. The latter project was led by Alec Costin who was by then (in the early 70s) an Assistant Chief in PI.

The position of Officer-in-Charge at the CSIRO Pastoral Laboratory (then part of Plant Industry) at Deniliquin became vacant when John Leigh moved to the Ecology Section at Canberra and Ted enthusiastically took up the position at Deniliquin for a period. At that time too, Richard Groves replaced Ted as Chairman of the Ecology Section. The job at Deniliquin took Ted back to the Riverina region that he had surveyed over 20 years before and, although the roads north from "Dennie" were in a worse state (especially when it rained) than those from Canberra, it was geographically closer to the Cobar-Bourke area where he was then working. Ted’s involvement with that region and its major land-use problem attracted several of the Deniliquin staff, such as Ken Hodgkinson and Jim Noble, to investigate other aspects of the overall problem, a research interest that continued for many years after Ted left Deniliquin and returned to Canberra in 1973 to live in retirement.

Ted had come to Australia in the 30s as a single man but in his early years in Canberra he married Dorothy and they had two children Michael and Robin, who grew up in the house at 80 David Street, Turner, where Ted continued to live in retirement. That house always had dogs as much loved members of the household. One such dog (a boxer) even used to come to work with Ted and snore and snuffle loudly under Ted’s desk, which made even the simple request to sign a leave form a somewhat daunting experience. It was sad that Dorothy died early in Ted’s long period of retirement, although soon thereafter Robin moved into the family house to live with her father and, increasingly, to look after him in a most selfless way.

Plant collections in the Canberra herbarium

Ted’s prolific plant collecting started with herbarium specimens lodged in the Australian National Herbarium dating back to August 1945. During his long career in CSIRO and after he retired in 1973, he collected systematically and extensively throughout western New South Wales and to a lesser degree in and around the ACT. He even made collections on his several holidays to New Zealand and around Mackay, Queensland. Ted collected close to 9,500 specimens with the last specimen being collected from his garden in Turner in March 1998. That’s close to 53 years of collecting which is rather impressive !

A summary of his main collecting activities is provided below.

Ted also had a way of finding many interesting plants and six new species were named in honour of him, namely:

Ted always made excellent collections and they have provided valuable information for ecologists and botanists, especially those interested in the flora of western New South Wales (see Moore 1984). He was also very happy to share his detailed knowledge of the flora and the areas collected with all those who might request it. During his retirement when Ted wasn’t off collecting he would come into the Herbarium everyday and spend much of his time updating his older collections and processing the newer ones. By then in his 70s, he was keen to have an electronic record of all his collections, and he became adept at entering his collection data into the herbarium specimen database. Ted also added latitude and longitude coordinates to most of his earlier collections, because as he quite rightly put it ‘he knew where he was at the time of the collection’ and herbarium technical staff have been grateful for this ever since.

Looking for a challenge once he had his collections in order, Ted took up the curation of the family Caesalpiniaceae. Due to his earlier experiences with the arid shrublands he became very interested in the taxonomy of the native genus Senna (originally segregated from Cassia by Miller). Regrettably, although he appears to have had strong ideas on the subject, he never managed to publish any solutions to the ongoing taxonomic problems plaguing this complex group.

Ted has been an inspiration to herbarium staff over the years with his determination to continue on with his botanical interests.

Moore, C.W.E. (1953a). The vegetation of the south-eastern Riverina, New South

Moore, C.W.E. (1953b). The vegetation of the south-eastern Riverina, New South

Moore, C.W.E. (1984). Annotated checklist of the vascular plants in part of northwestern