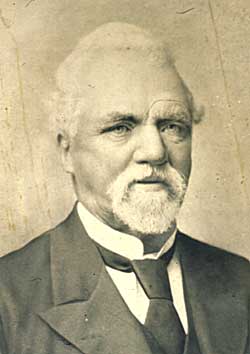 Arrived in Sydney on 14 January 1848 to take up the position of Director, Botanic Gardens, Sydney, a position he occupied until 5 May 1896. He undertook numerous collecting expeditions in eastern New South Wales, and from 1850 delivered lectures in botany to medical students and others. In 1850 he collected in the New Hebrides [Vanuatu], Queen Charlotte Group, Solomon Islands and New Caledonia. Moore visited Lord Howe Island in 1869, and published a report on the vegetation (1870). He wrote a census of New South Wales plants (1884) and (with E.Betche) a Handbook of the Flora of New South Wales in 1893. His main collections are in K, with others in BM, E, FI, MEL and NSW. Moore sent collections to Mueller at first, but later, after a disagreement with him, forwarded at least some directly to Bentham.

On the recommendation of Prof. Henslow, he was appointed Director of the Botanic Gardens, Sydney, by the Secretary of State, and arrived in Sydney 14th January, 1848. From that date until 5tb May, 1896, a period of over 48 years, he occupied tbe post with advantage to the country and credit to himself. He was a member of Royal Soiciety of New South Wales for forty-nine years, occupied the offices of President, Vice-President and Councillor, and contributed several papers to its Journal. I contributed notices of Mr. Moore to the "Sydney Morning Herald" and Daily Telegragh" of 2nd May, 1905; there is a notice in the "Gardeners' Chronicle" of 13th May 1905, by F. W. Burbidge, and one in the "Journal of the Kew Guild" for 1905 by his nephew, F. W. Moore, Director of the Botanic Garden, Glasnevin, Dublin.

The following were published by him :- "Lord Howe's Island; sketch of the vegetation, etc." Sydney 1869, fol. " A census of the plants of New South Wales," Sydney, 1884, 8vo. "Handbook of the flora of New South Wales," assisted by E. Betche, Sydney, 1893, 8vo. "Catalogue. of plants in the Government Botanic Gardens, Sydney," Sydney, 1895, 8vo. "Woods of New South Wales, Sydney International Exhibition, 1870." He also wrote a Journal of a "Cruise in H.M.S. "Havanah," (Commodore Erskine) to the South Sea Islands, extending from 14th July to November, 1850." Visited New Zealand, New Hebrides, and New Caledonia. The journal, which is in MS. is in the possession of his family in Sydney. A portrait of Mr. Moore was hung in the Museum of the Botanic Gardens in March 1906. It was the gift of some personal friends, including Mr. W. J. Trickett, M.L.C., and Mr. Haege.