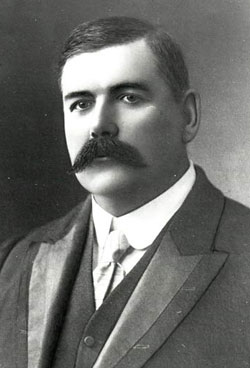 He was educated in Adelaide and in his young days was employed on surveying of the Great Southern Railway in Western Australia.  He had a keen interest in politics and was a member of the Bunbury Town Council and later mayor.  In 1904 he was elected to the WA Legislative Assembly as member for Bunbury; in the following year he became Minister for Lands and Agriculture, and Premier in 1906 until his ministry was defeated in 1910.  Except for war service, he was Agent-General for Western Australia in London from 1911 to 1918; during the war he held the temporary rank of major-general, as G.O.C. commanding A.I.F. depots in Great Britain (he had previously taken an active part in army operations in Western Australia).  He was elected to the House of Commons in 1918 and sat almost continuously until 1932.  On his retirement he was appointed President of the Dominion Coal and Steel Corporation of Canada, and applied his mining and engineering experience to the development of the iron and steel industry in Canada.