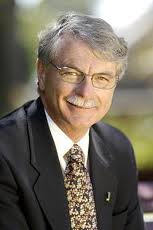 Dr Philip Moors announced on 13 March 2012 that he would retire from the Royal Botanic Gardens Melbourne on 4 November 2012, when he will be the second-longest serving of all directors in the Gardens' 166 year history. Having commenced his directorship on 9 November 1992, by the time of his retirement he will have been leading RBG Melbourne for 20 years, second only to William Guilfoyle who served for 36 years.

Born in Sydney on 5 April 1948, Moors' resume includes university study in Scotland and a stint as director of what's now known as Birds Australia. He also spent 15 years in New Zealand's Department of Conservation.

"I have been privileged to be RBG Melbourne's Director and Chief Executive during a notable period of revitalisation and major capital projects. Many of the RBG's projects and programs over the past 20 years have broken new ground: for example, the creation of the Australian Garden and the Ian Potter Foundation Children's Garden; the development of Observatory Gate at Melbourne and the Woodland Picnic Area at Cranbourne; the establishment of the Australian Research Centre for Urban Ecology; our leading research and curatorial work in the National Herbarium of Victoria and major involvement with the 2011 International Botanical Congress in Melbourne; our water conservation successes leading to the stormwater harvesting and irrigation benefits of the Working Wetlands Project; the Gold Medal awarded to our Australian Garden at the 2011 Chelsea Flower Show in London; pioneering the nationally successful Moonlight Cinema shows each summer; and the landscaping and opening to public access of Guilfoyle's Volcano. There have been many other successful horticultural, scientific and educational projects during that time, and together all these results have clearly shown the RBG's energy and vitality."