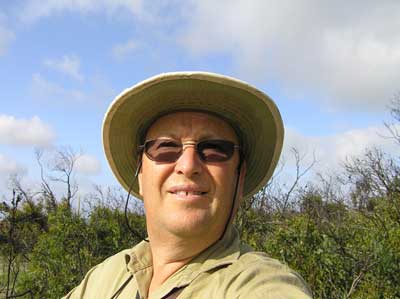 I was born in 1957 at Victor Harbour, South Australia, and lived all my life at Port Elliot. I was educated at Port Elliot Primary and Victor Harbor secondary schools. I started work with the PMG (now Telstra) as an apprentice in 1974. During 1980 I was sent to work in Alice Springs for several months. It was during this time my interest in nature increased. I started photographing plants and purchased my first book on plants, a bird book and binoculars.

On my return in 1981 I joined the South Coast Field Naturalists. Here I met Glen Stephens, a botanical artist and Don Overall, a bird watcher and native plant grower. Glen knew native plants and helped me learn their names as I photographed them. Don introduced me to the local birds.

My main interest grew to be our South Australian flora. As I travelled on holidays, I photographed many flowers including orchids. I had no idea of some of their names, so I sent the orchid photos to the State Herbarium. This introduced me to Bob Bates who sent back my photos with comments "out of range, need collections", "different to type" etc. This is when I decided to start collecting plants which was during 1986.

I began listing which plants grew in the local Conservation Parks and sent specimens to the State Herbarium. After a year of collecting, I began picking up some names. I then brought the Flora of South Australia and a microscope, so I could look up my own specimens and learn where I was misidentifying their names. This interest gave me a good grounding in my local flora to the point others thought I was good with plant identification. I was then asked to go on botanical surveys in my local area which showed me how much I still had to learn, especially in weed and grass identification in the field.

My first survey started April 1987 in the southern Fleurieu Peninsula these continued to April 1991 mainly done on rostered days off. In August 1987 while doing surveys in the Strathalbyn area, I met Rosemary Taplin and having noted her similar "botanical skills", I teamed up with her to do surveys of the many Parks, Reserves and private swamps across the Southern Lofty, Murray and South-east regions of South Australia.

My second interest of birds started seriously when I joined the South Australia Ornithological Association (Birds SA) in 1987. I attended many of their organised field trips to help me with bird identification. Early in my birding years I met John Eckert from Langhorne Creek, who had a vast knowledge of birds of South Australia. John became my mentor for all to do with birds, teaching me much about identification and habitat.

Work took me away from home and gave me an opportunity to see the flora and birds in many different places. Some of my work locations were the Northern Territory, Western Australia, New South Wales, Victoria and Tasmania. Most was in various areas of country South Australia with over two years on Eyre Peninsula and a similar time spent in the far Northeast, out of Leigh Creek. I retired from Telstra in 2014 after forty years of service and consider myself fortunate to have been able to go to many places while working for Telstra.

All of my botanical and birding activities are purely a leisure activity.

Birds: In 1998 the Birds Australia Atlas started, which ran for four years. I submitted over 1000 surveys from right across South Australia, some from the Northern Territory and Western Australia. After the Atlas finished, Birds Australia has continued receiving bird data to compile long term monitoring information. I have continued doing bird surveys at a lesser pace and have now done well over 2500 surveys and still continuing. Many of these surveys were done while I was working away or doing plant surveys, when on holidays and now in retirement.

Allen Lowrie: I first made contact with Allen in 1990 after I found an interesting trigger plant in Cox Scrub Conservation Park. Allen is passionate about carnivorous plants and trigger plants. He asked me to collect many specimens of these plants from the Southern Lofty region and other locations when working away. Over the years I have also been on many field trips with Allen, learning much about the species he loves and helping him discover new species. I have collected over 650 specimens for Allen from several areas of Australia.

David Jones: My interest in orchids grew from my fascination with unusual plants. My initial contact with David came out of a holiday to Western Australia in 1991. I decided to collect some carnivorous plants and trigger plants for Allen Lowrie, while in the more remote areas of Western Australia. I also made contact with Andrew Brown, the WA orchid specialist before I left and he suggested I collect some orchids in any remote areas. On my return home, Andrew suggested I send my collection of orchids to David Jones the orchid specialist in Canberra, instead of WA. After I received my reply back from David I then started sending fresh orchid specimens from South Australia to help further his orchid research. From 1991 to when David retired from work I sent him over 550 specimens of orchids, from Western Australia, Northern Territory and Victoria, with most (over 450) from South Australia.

Books: I have contributed to several books including Plants of the Adelaide Hills and Plains where I collected many of the fresh specimens for illustration by Gilbert Dashorst. I have supplied photographs for the following: Wildflowers of the Mount Lofty Ranges, Acacias of South Australia, Carnivorous Plants of Australia, volume 3 and Carnivorous plants of Australia Magnum Opus. Through my association with John Eckert, I was asked to co-author with Rosemary Taplin the chapter on vegetation in the Natural History of Strathalbyn & Goolwa Districts. I also provided 100 plant photographs for this chapter. While surveying to write the chapter for John, he also emphasised the importance of keeping accurate records and the need to collect plant specimens so they are available for future scientific research.

Seeds: The South Australian Seed Conservation Centre was established by the Botanic Gardens of Adelaide in 2002. Later I was approached by Dan Duval, asking about some of my plant collections to help with locations. During 2007 I was invited on one of their seed collecting trips to the Northeast of South Australia. From then I have done several more trips including 2 significant trips—one to The Lake Eyre Basin including Cordillo Downs after a heavy rain event, and one to the Mamungari Conservation Park in the Great Victorian Desert. I am now contributing images to their web site Seeds of South Australia.