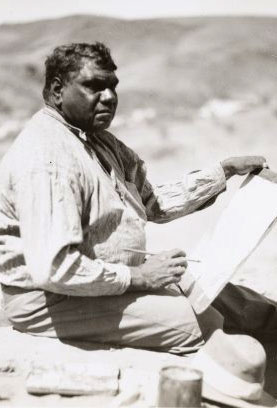 Albert Namatjira was the first indigenous artist to paint and exhibit professionally in Western style. He painted his country and was both prodigious and successful, producing approximately two thousand pictures and founding a school of painting that continues today.

Namatjira, an Arrernte man, was born on 28th July 1902 near Ntaria (site of the Hermannsburg Mission, about 120 kilometres from Alice Springs). Visiting artist Rex Battarbee first taught him the technique of watercolour painting. In 1936 Battarbee took Namatjira on an eight-week painting tour, giving him the only tuition he was to receive.

Namatjira’s first solo exhibition of 41 works was held in Melbourne in 1938. All works sold quickly. Over the next ten years exhibitions were held in various capital cities of Australia and Namatjira became a celebrity. He was awarded the Queen’s Coronation medal in 1953; was flown to Canberra to meet the Queen and the Duke of Edinburgh in 1954; his portrait, by William Dargie, won the Archibald prize in 1956; and in 1957 he was granted citizenship (a status denied to most Aboriginal people at the time). Before his death on 8 August 1959 at least three films had been made about him.