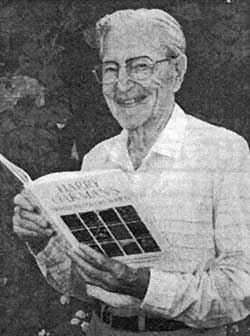 HARRY OAKMAN was one of the pioneers of the Australian landscape architectural profession. His career included a nine-year term from 1963 as the first Director of Landscape Architecture of the National Capital Development Commission, and Commonwealth Park was constructed under his direction.

Those who knew him then will remember his charm and good humour.

Despite the difficulties of his formative years, he made much of his 96-year-long life, not only as a landscape architect, but as a fine botanical photographer, an author of numerous illustrated horticultural books, an expert gardener and a musician.

Jennifer Vickers, of Brisbane, has provided some insights into Oakman's early life.

He was born in Lommel/Limberg, Belgium, in April 1906. His mother died when he was only two years old and his father was forced to leave him to the care of orphanages.

During World War I he was at an English boarding school, where his loneliness continued and he was victimised for his Belgian back-ground.

At age 14 he emigrated with his father and spent much of his teenage years on agricultural training farms in NSW.

From age 17, he worked in Sydney in a flower nursery at Pennant Hills and, in his 20s, in the parks of the Ku-ring-gai Council.

It was at this time that he decided to develop his interests in landscape architecture and, not least of all, in music, art and photography -for which he maintained a passion all his life.

Landscape architecture did not exist as a profession at this time.

Much of his education was at night at technical colleges in Sydney, and later in Newcastle and Brisbane.

He pursued his love of music as a dance-band clarinetist and his experience included playing on several passenger-ship voyages to the United States and for silent movies at the Hornsby picture theatre.

After a five-year stint working in the parks of Newcastle, Oakman began, in 1945, a 17-year appointment as Superintendent of Parks in Brisbane, the largest local government area in Australia.

He accepted the challenge of transforming many parks degraded by five years of military occupation.

Oakman brought valuable expertise to the NCDC, which was extremely useful to Canberra at that time.

It was a period of intense development activity and he directed the landscape establishment of Woden and Belconnen and the Lake Burley Griffin shores.

He also achieved a commitment to develop Commonwealth Park and, by the time of his retirement in 1972, its basic development was complete.

There is an award and a park named after him in Brisbane. He had a long retirement in Brisbane. He continued to design many public landscapes and became recognised as one of Australia's foremost authors of illustrated horticultural books.

Oakman's book about tropical and subtropical gardening, his best seller, is considered by many to be the gardening bible for Queensland gardeners.

His ninth and final book was published just before his 90th birthday. Britain's Oxford Scientific Films acquired many of his superb botanical colour slides. He also kept a large one-hectare garden, which was known for its year-round colour.