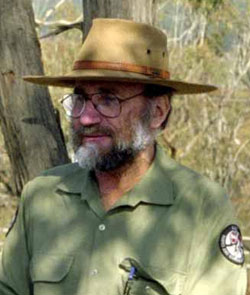 The Ormays lived at Burrinjuck Dam where Peter enjoyed the outdoors as a child. After leaving school at 15 he trained as a carpenter, earning two of the top state awards on completion of his training. His skills earned him a place at the Wilkes Base in Antarctica in 1963, where he was held in high regard. Peter was awarded an Antarctic Medal in 1969 and Mount Ormay in the Prince Charles Mountains was named after him.

In 1965 and 1967 Peter worked on Macquarie Island, inspiring him to start a Bachelor of Applied Science as a mature aged student as the Canberra College of Advanced Education.

Peter Settled in Canberra in Aranda, surrounding his house with a native garden, and installing a bee hive with honey-comb behind glass so he could see the bees going about their business. He was employed as a Ranger with the ACT Government's Parks and Conservation unit.

He was one of the original authors of the National Parks Association's Field Guide to the Trees of the ACT first published in 1983. He also brought his expertise to the Black Mountain Spring Wildflower Walk for many years. He was an active member of the Friends of Aranda Bushland and contributed significantly to that organisations booklet, Our Patch, together with their Reference Herbarium which is now an adjunct to the Public Reference Herbarium located at the Australian National Botanic Gardens.

Peter's knowledge of eucalypts was consolidated in A Field Guide to Eucalypts in the ACT, a useful field guide pamphlet with diagnostic diagrams. He also published scientific papers, sometimes in collaboration with Frank Ingwersen.

It was Peter’s long term vision to protect and interpret our now-rare conjunction of four distinct ecosystems containing ten eucalypt species, in a one to two hour walk in the heart of Canberra. This is now the “Frost Hollow to Forest” self-guided walk.

He was a keen photographer and contributed images to the 'Environment ACT Natural History Collection', available at ACT Public Libraries.