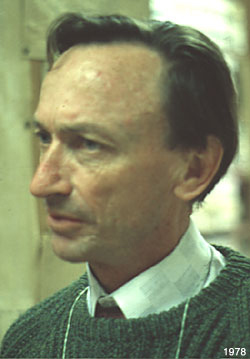 Les Pedley attended Ipswich Grammar School and on finishing school in 1948 he became a cadet in the Department of Agriculture and Stock in Brisbane. After a 5-year cadetship, during which time he gained a Bachelor of Science from the University of Queensland, he was appointed as Assistant Botanist in 1953 at the then Botany Branch and Herbarium located in George Street in Brisbane.

In the 1960s Les was seconded to CSIRO to work on two Queensland Land Use surveys — Nogoa-Belyando in 1964 to 1965 and Maranoa-Balonne in 1968 to 1969. In 1968 he carried out a survey of the vegetation of Cape York Peninsula with Ray Isbell (CSIRO, Canberra). From these surveys Les developed a love and appreciation for Queensland's open country and the plants and birds that inhabited these landscapes.

Les studied Latin and French at high school and in the later part of the 1970s he returned to the University of Queensland to pursue an Arts degree including further Latin studies. This he successfully completed in 1980. Les's Latin skills, plant nomenclature and taxonomic knowledge were always greatly appreciated by his colleagues and friends at the Queensland Herbarium.

Les was the Australian Botanical Liaison Officer at The Herbarium, Royal Botanic Gardens, Kew, from 1971 to 1972, and he thoroughly enjoyed this experience. He returned to work at Kew in 1992 and while there he wrote accounts of legumes for the Handbook of the Flora of Ceylon.

Les was the Editor of the Queensland Herbarium's scientific journal, Austrobaileya, from 1977 to 1988, and he was a member of the Editorial Committee of the Flora of Australia from 1980 to 1988.
Les officially retired from the Queensland Herbarium as Assistant Director in 1988 but he enthusiastically continued to pursue his taxonomic studies as a Research Associate at the Herbarium. He worked 5 days a week, dropping back to 4 days, for the next 30 years and published more scientific papers in 'retirement' than he did while employed.

Also in retirement, Les participated in the Royal Geographical Society expeditions to Heathlands in Cape York Peninsula in 1992 and to Sweers Island in the Gulf of Carpentaria in 2002. In 2008 Les was awarded an Australia Day Achievement Award from the Department in recognition of his outstanding contribution to Queensland botany.

While Les didn't suffer fools lightly, he willingly and cheerfully mentored many professional and amateur botanists over his lifetime. He was more than willing to share his encyclopaedic knowledge and experience of legumes and was generous with his time and skills in sharing that knowledge. Any question, no matter how simple, naive or apparently stupid, was always answered in a kind manner and with as much accuracy as possible.