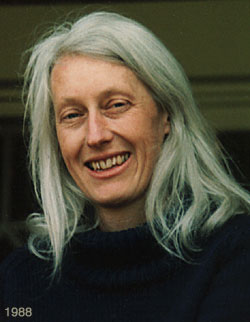 Fell in love with Botany while a student at Unley High School, South Australia. This led her to do a B.Sc. majoring in Botany and Zoology and a B.Sc. (Hons) in arid zone ecology at Adelaide University. After teaching Botany and English at Serdang Agricultural University in Kuala Lumpur, Malaysia from 1970 to 1972 with Australian Volunteers Abroad she went to Canberra and completed a Ph.D. in fire ecology at the Australian National University.

In March 1976 she commenced work as a Botanist at the Queensland Herbarium, Brisbane as part of small multidisciplinary teams for the Western Arid Region Land Use Study. This involved extensive field work and plant collecting in the Charleville-Cunnamulla region over 1976-77 and in the Birdsville-Boulia region in 1977-78.

She returned to Canberra in June 1980 and worked as a private consultant for five years. Major projects included field-based assessments of the natural heritage values of the Simpson Desert for the Australian Heritage Commission, and of the Mulga Biogeographic Region of Queensland to help develop a network of conservation reserves for the Qld National Parks and Wildlife Service.

In 1985 she joined the Commonwealth Public Service, working as an Editorial Assistant at the Bureau of Flora and Fauna (March 1985 to November 1986), a variety of positions at the Australian Heritage Commission (November 1986 to April 1998) including Deputy Executive Director, and Director Natural Resource Evaluation and Communication at the Murray Darling Basin Commission (May 1998 to May 2002). After retiring from the APS in 2002 she worked as a freelance consultant until June 2004 when she was appointed the ACT Commissioner for the Environment, a position she held until December 2006 when she 'fully retired'.

After leaving the Queensland Herbarium in 1979 she continued actively collecting plants during her spare time in many parts of Australia, often as vouchers for photographs taken by M. Fagg. In the late 2010s they also included specimens from the Simpson Desert collected during camel-supported field trips with Australian Desert Expeditions.

From January 2007 to the present she has been an Honorary Associate at the Australian National Herbarium. Her activities have included general collecting and identification of native plants (including cryptogams) and weed species as vouchers for photographs for the Australian Plant Image Index; targeted collecting to support regular revisions of the Census of Flowering Plants in the ACT and general collecting and monitoring of plant diversity in Canberra Nature Park (especially Black Mountain Nature Reserve). The latter led to many years of active involvement with the Friends of Black Mountain.

Her botanical collections are lodged mainly with the Queensland Herbarium and the Australian National Herbarium, with duplicates in relevant state and territory herbaria.