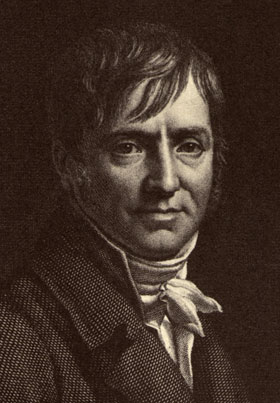 Born in 1759 at Saint-Hubert, a village in a part ofthe Ardennes that then belonged to the Duchy of Luxembourg and now belongs to Belgium. His father painted, and so eventually did two brothers. At the age of thirteen, having learned what he could at home, he set out with his paintbox to explore Flanders and the Low Countries. During the next decade he earned an uncertain living as an itinerant artist (in the same tradition as that of the 'limners' who were roaming the American colonies), studied the available old masters, managed to acquire a year of further training in an atelier at Liege, and underwent something like a conversion, in Amsterdam, by discovering the work of the finest of [he Dutch eighteenth-century flower painters, Jan van Huysum. In the meantime the eldest of the Redouté brothers, Antoine-Ferdinand, had become a stage-set designer in Paris, and in 1782 Pierre-Joseph followed suit.

By now, however, his first interest was botanical illustration. He began to frequent the Jardin des Plantes (then still the Jardin du Roi but already, under the energetic Buffon's direction, a splendid scientific enterprise), where he met a wealthy Linnaeus disciple, Charles Louis L'Heritier de Brutelle, and profited from the encouragement of Gerard van Spaendonck, a Dutch water-colourist who had become the institution's professor of flower painting. L'Heritier took the obviously gifted young provincial under his wing, gave him access to a large botanical library, and involved him in a trip to England to study the exotic plants at Kew. By 1788 Redouté was the illustrator of two of his patron's books, Stirpes Novae and Sertum Angicum; a year later he was named, probably at L' Heritier's suggestion, draughtsman to the cabinet of Marie-Antoinette.

During the Terror of the French Revolution he was appointed to the staff of the former royal botanical garden, which had become the Jardin des Plantes and the Museum National d’Histoire Naturelle, with the Rousseauist Bernardin de Saint-Pierre as director. By now he was showing his pictures of flowers, fruit, and mushrooms in the official Salon and serving on the powerful jury of well-known painters (including David, Vien, Gerard, Fragonard, and Carl Vernet) that dispensed awards to exhibitors. Under the Directory, which brought a burst of spending by nouveaux riches tired of Revolutionary austerity, he continued to prosper, and began to gravitate towards the rising star of Bonaparte. (The youngest of the Redouté brothers, Henri-Joseph, served under the general in Egypt as a zoological draughtsman.) Then he went into high gear. Between 1798 and 1804 appeared, or began to appear, since some of the productions came out in instalments over several years, his illustrations for his Les Liliacées, for A. P. de Candolle’s Plantes Grasses (partly undertaken earlier), for André Michaux’s Histoire des Chênes & Mmérique, for the same author’s Flora Boreali-.dmericana, for Duhamel du Monceau’s Traité des frbres et .drbustes and for Etienne-Pierre Ventenat’s Jardin de la Ma/maison—ultimately a grand total of more than a thousand plates. By the time of the 1805 edition of Rousseau’s Botanique Pierre-Joseph Redouté was a celebrity,’ le Raphael desfieurc, and a well-to-do business man with a fashionable clientele, a private apartment in the Louvre, a country residence near Paris at Fleury-sous-Meudon (where Jean-Jacques had once botanized), and a salary of 18,000 francs a year as Josephine’s decorator and flower painter at Malmaison.

A contemporary of Redouté, the memoir-writer Joseph-Francois Grille, describes him:

A dumpy body, limbs like an elephant’s, a head as heavy and flat as a Dutch cheese, thick lips, a hollow voice, crooked fingers, a repulsive look, and beneath the skin an extremely delicate sense of tact, exquisite taste, a deep feeling for art, a fine sensibility, nobility of character, and the perseverance needed for the development of genius: such was Redouté, who had all the pretty women in Paris as his pupils.

Source: Roy McMullen in 'Botany: A Study in Pure Curiosity, Botanical Letters and Notes towards a Dictionary of Botanical Terms' by Jean-Jacques Rousseau illustrated by P.J. Redouté, Michael Joseph, London, 1979