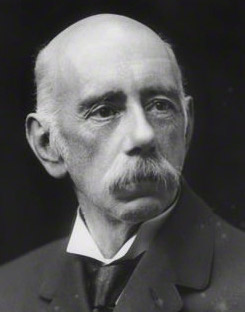 Ridley was the first Scientific Director of the Singapore Botanic Gardens from 1888 to 1911.

Ridley had been working at the British Museum when he was asked to take part in an expedition to Brazil; the experience he gained there led to his being chosen for the directorship of the botanical gardens at Singapore. He stayed in this position for more than twenty years, taking advantage of the post to familiarize himself with the botany of the surrounding regions. On retiring from the directorship he continued his natural history studies, living on for another forty-five years.

Ridley is most remembered these days for three things: his monumental five-volume Flora of the Malay Peninsula, his key role in establishing rubber as a plantation crop in Malaya, and his interest in the agents of plant dispersal, study of which led to the publication of his important book The Dispersal of Plants Throughout the World in 1930.

Ridley retired from Singapore in 1911 and resided in England for the remainder of his life. On his 100th birthday in 1955 he received a visit from the High Commissioner of the soon-to-be independent Malaya. 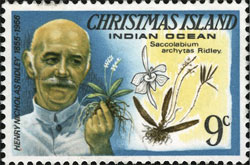 Christmas Island was administered by the British Colonial Office through Singapore until 1958. With Singapore's independence, Australia took over the administration of the island.

Ridley visited Christmas Island accompanying the Straits Settlement Administration's annual visit to the island for "10 hours" in the gunboat Redpole in 1890, landing at Flying Fish Cove, "during which time I collected as many plants as I could, in the Cove and up as high as the Plateau". An account of this trip was published in the Journal of the Straits Branch of the Asiatic Society Vol. 22, p. 123.

He undertook a later more extensive expedition, starting for Christmas Island on 20 September 1904 in the SS Islander and reached there on 25th. They stayed nearly a month, leaving in the Islander on 28 October 1904. Each day was filled with plant collecting forays, recorded in detail in the Journal of the Straits Branch of the Royal Asiatic Society, No.45, June 1906. The botanical records of this expedition are published in the same volume of the Journal in a paper of 115 pages.