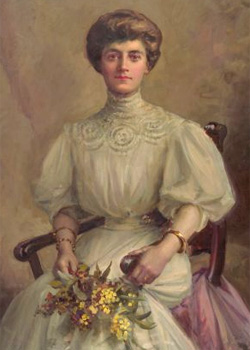 Ellis Rowan was one of Australia's most adventurous and talented natural history artists, specialising in flowers and birds, and occasionally insects.

The first child of Charles and Marian Ryan, Ellis grew up in Victoria in a family which had an appreciation of natural history, gardens and art. While living in New Zealand, she was encouraged by her husband, Frederic Charles Rowan, to develop skills as a 'wild flower' painter. Untrained, but talented and enthusiastic, she rapidly emerged as a competent artist and won important art prizes in Australia and overseas. This angered the purist art world which regarded her work as flower painting belonging in museums, not art galleries.

The reality is that her work crossed the boundaries between art and natural history illustration. Much of her work is of a very high standard in both these disciplines. Her studies of flowers, insects and birds were often set in context, with the environment being done in an impressionist style.

Ellis became obsessive about her work and her endeavours to find new subjects. Occasionally this took her into environments which were both difficult to get to and dangerous. Her working conditions in Western Australia and North Queensland were difficult; in New Guinea they were worse.

It is often overlooked that she also painted north American flora and illustrated a text-book on the flora of the USA.

In her own words:

" My love for the flora of Australia, at once so unique and so fascinating, together with my desire to complete my collection of floral paintings, has carried me into other colonies, Queensland and some of the remotest parts of the great Continent of Australia. The excitement of seeking and the delight of finding rare or even unknown specimens abundantly compensated me for all difficulties, fatigue and hardships. "

The bulk of her Australian and New Guinea collection is owned by the Australian Government and is housed in the National Library in Canberra. This fulfilled one of her dreams - to have the work available for the Australian people.