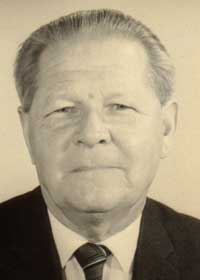 Born in Estonia, Hugo graduated Doctor pharmaciae at the University of Tartu in 1932. He was the Director of Pharmacy Department in the Ministry of Social Services (1933–1940) and compiled the first Estonian Pharmacopoeia (1937), being awarded the White Star decoration by the President of Estonia.

Botany and herbal medicine formed an essential part of his training, resulting in lifelong interest in the plant world. Having experienced the Soviet occupation of Estonia in 1940/41, he fled to Germany when the Soviet forced were re-occupying Estonia in 1944. He continued studying and collecting plants in postwar Bavaria, as well as in Australia where he arrived in 1949. Over the next 30–35 years he collected a herbarium of over 5,500 specimens of Australian flora, sending duplicates to Sydney Botanic Gardens for identification. Several of his findings were mentioned in the publications of the Royal Botanic Gardens and National Herbarium, Sydney.

In addition to satisfying his botanical interests, Hugo was the (unpaid) archivist of Estonian Archives in Australia (1953–1991), the main purpose of which was to counteract the genocidal attempts of the Soviet regime to wipe Estonia and Estonians off the map and history books.

When Estonia regained independence in August 1991, Hugo sent his herbarium of Australian flora to the University of Tartu, where it was deposited next to his Estonian herbarium from 1927–1943.