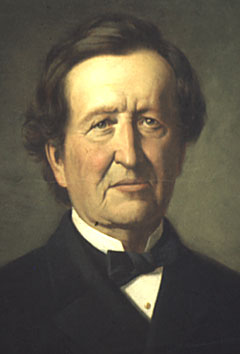 Trained as a gardener in Germany, he joined his brother Robert on a joint British/Prussian scientific expedition to British Guyana in 1844. He emigrated to South Australia in 1849, settling with other family members near Gawler. Appointed Director of the Adelaide Botanic Garden in 1865, developing much of its present infrastructure (Palm House, tropical house for Victoria amazonica, Museum of Economic Botany, etc.) over the next 25 years. He was influential in encouraging street tree plantings in Adelaide, and in early forest conservation measures, and established the major plantings in Adelaide's Botanic Park. Under his directorship numerous potential crop plants were trialled, particularly forage and pasture species. He developed the first institutional herbarium and botanical library in Adelaide. He made few botanical collections, but his world-wide reference collection is now at AD.