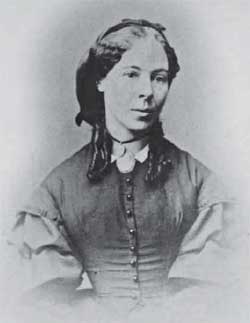 The second of two children, to settlers Alexander Walker Scott (1800-1883) and Harriet née Calcott (1829-1866). The family lived on Ash Island, and Helena and her sister Harriet were educated at home in natural history by their father.

Helena and her sister (see HARRIET SCOTT) collected MEL specimens at Ash Island, 1862, (no date), and south of Newcastle, 1862.

In 1864, Helena married the surveyor Edward Forde (d.1866), and travelled with him. They did not have any children.

Helena collected MEL specimens (as 'Mrs Forde') in NSW at the Darling River, 1865, 1878; Lower Darling River, 1866; and Darling Downs, Hunter River, Newcastle and Wentworth, (no date); and in SA at Blanchetown and Murray Bridge, 1865.

A possible syntype of Hypopterigium scottiae Müll. Hall (1868), collected by and named for Helena, has been labelled as being collected at Brisbane River, but the locality has probably been confused with that of another syntype for the same name collected by AMALIA DIETRICH.

There are also Helena Scott (as 'Helen Scott') specimens at B.

Helena and her sister, Harriet, were natural history artists.

An example of Helena's artwork can be seen here: