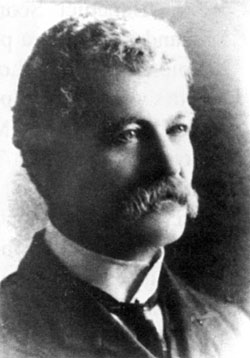 He was educated at the University of London and Saltley Training College, Birmingham, and early won a reputation as a good teacher at Bishop Ryder’s School, Birmingham, where he remained for eight years.  In 1878 he arrived in Brisbane as one of a number of teachers imported by the Queensland Department of Education; he was appointed headmaster of the school at Roma.  The next year he was promoted to inspector of schools and in 1909 to senior inspector.  When the Teachers’ Training College was established in Brisbane in 1914 he was selected as first principal, holding the position until he retired in 1919.

During his 41 years of service he was, thanks to the nature of his inspectorial duties, able to follow his interests in botany, zoology and geology.  He published many papers, mainly in Proc. Roy. Soc. Qld.  His research work was mainly connected with botany and conchology. In the field of botany he collected and mounted about 2500 species of plants and his most important work was a carefully compiled monograph on the lichens of the State.  At the age of 63 he was awarded the degree of D.Sc. by the University of Sydney on the basis of examination and submission of a thesis on The Thallus of the genus Parmelia.

Dr Shirley was a member of the council of the Royal Society of Queensland from 1887 until his death and was twice president.  He held the position of Queensland Secretary of the Australasian Association for the Advancement of Science for the uniquely long period of 31 years (1891 until his death). For many years he had been Honorary Conchologist to the Queensland Museum and in 1920, after his retirement from the teaching profession, was appointed Conchologist.

SHIRLEY, J. (1888) The lichen flora of Queensland, with descriptions of species, Part I. Proceedings of the Royal Society of Queensland 5: 80-100.