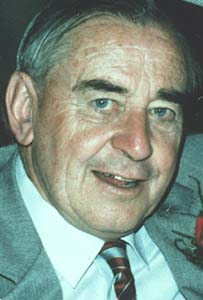 (Eulogy below, delivered by John Gray at his funeral in Braidwood, 18 May 2000)

David Shoobridge was an unassuming and modest person who was much loved by many people. He was a gentle man. In his personal and professional life he respected those with whom he was associated and they in turn respected him. He was a man of the soil who knew plants well and in this context he achieved much in his life-time.

David was born in Hobart on 27 March 1913. The Shoobridge name is well known in Tasmania and there has always been an agricultural/horticultural thread in it. While at school, David met Mollie Cole and they were eventually to marry in 1936. They raised six children - Barbara, Peter, Gwendolyn, Keith, Dianne and Graeme. David was proud of them, their partners and off-spring. There are now 13 grandchildren and 13 great grandchildren.

David was educated at Clemes College, which is now part of Hobart's The Friends School. In January 1931 he was awarded one of three cadetships from over 150 applicants in Tasmania to join the state's Forestry Department. This enabled him to study forestry at the University of Tasmania and the Australian Forestry School, Canberra. From 1935 to 1939 he was a Forestry Officer at Geeveston in the Tasmanian Forestry Department. At the beginning he had no staff. All he had was a set of county land maps for the region he was to manage which was about 20% of the commercial forested area of Tasmania. He developed in this period the nucleus of a forest management system for Tasmania for which, in his own modest words, the State "may now be proud".

Late in 1939 he was seconded to Canberra as the ACT's Assistant Forestry Officer. This war-related transfer proved to be permanent. His work in the National Capital in this difficult wartime and post war period, centred largely on pine plantation management, firewood production, bushfire control measures, and the management of native forests for wood production.

David settled his family into a house on a large block of land in the Canberra suburb of Red Hill. Here he and Mollie were able to pursue their joint interests in horticulture. Vegetable gardens, fruit trees and a great collection of trees and shrubs were built up here. There were also sheep and fowls. I should not forget cows Polly and Muriel, who surprised my wife on the occasion of a visit to the Shoobridge household many years ago. The Shoobridges were strong supporters of horticulture in Canberra and submitted many successful blooms to the Horticultural Society shows. They were founding members of the First Canberra Garden Club. David was active in the Methodist (later Uniting) Church, as well.

In 1952 David Shoobridge was appointed Assistant Superintendent, Parks and Gardens Section, Canberra. Six years later he became its Director, a position he was to retain until his retirement in 1975. Here David was able to combine his interests in forestry and horticulture and he served the National Capital extremely well in this period of rapid growth. The city's population grew from 30,000 to 240,000 in his time in Parks and Gardens. David coped with the demands well. He modernised techniques for managing Canberra's parks and contributed enormously to the fine reputation of Canberra as one of the world's most significant garden cities. He worked for improvements in the educational standards of his staff and established a sound research program to support park management practices. He was also very active in the planting of the Remembrance Driveway from Sydney to Canberra. Perhaps his proudest moment came in 1970 when Prime Minister Sir John Gorton opened the Canberra Botanic Gardens. David had worked tirelessly in the 1960s to achieve the investment of money and resources necessary to enable this opening of the gardens to the public. Today the gardens, now called the Australian National Botanic Gardens, has the most outstanding scientifically based collection of Australian native plants in cultivation in the world.

In the Queen's Birthday Honours List of 1973 he was awarded the medal of Companion of the Imperial Service Order. It was a well deserved recognition of his contribution to the nation and the National Capital.

Following retirement David and Mollie established a nursery and home on the Kings Highway 8 kms east of Braidwood, but alas Mollie passed away in 1978. David's son Graeme assisted David to develop further the site to a complete nursery and garden which was admired by all who visited it. This collaboration enabled Graeme Shoobridge to benefit greatly from his father's extensive horticultural knowledge.

In 1984 David married Victoria McDowall. We all know her as Queenie. We were all grateful that David and Queenie took this step at this time in their lives. We in the parks movement welcomed Queenie into our midst and enjoyed greatly the presence of these two love-birds at national and international parks conferences and study tours. David moved to "Brightside", on the Nerriga Road in the Braidwood district, where the redevelopment of the old garden there proceeded over the next seven years. It was a garden admired by all with its wonderful show of flowers, especially roses and daffodils. They both enjoyed gardening and visiting the many parks and gardens around Australia and overseas.

Finally yet another garden challenge was taken on in Braidwood at 14 Bunn Street when they moved there in 1990. During his time in Braidwood David was an Elder of the Uniting Church. With Queenie, he attended both the Uniting and Anglican Churches regularly, sometimes both churches on Sundays, hoping the service in one would end in time for them to get to the other church on time. David contributed to horticulture in Braidwood and was many times President of the Garden Club, readily giving his expert advice and talks to local residents. He was a regular exhibitor at the Braidwood Show winning many prizes every time he entered.

In September 1999 David and Queenie proudly showed me the blooms which had won David, with the help of Graeme, six first prizes in the Intermediate Division in the National Daffodil Championships at Bowral that month. A successful horticulturist to the end.

On behalf of all present here today, and the many people around Australia and the world who knew David, I extend to Queenie and her family, and all members of the Shoobridge family, our condolences on your sad loss. Our thoughts today are especially with Queenie, who has lost such a devoted husband.

David's spirit will live on in the many Australian gardens, parks and botanic gardens with which he was associated. We are all thankful for his work. He has left us much.