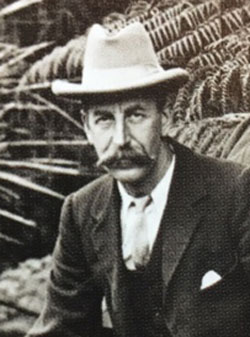 Born at Stretford, Lancashire, England, on 23 June 1860 and died at Ushuaia, Tierra del Fuego, Argentina, on 14 July 1929, when visiting Indians at the southernmost settlement in the world.

After graduating with first-class honours from Oxford University he became assistant to the Professor of Human and Comparative Anatomy at Oxford, and developed a lasting interest in anthropology and museum work.  In 1886 he obtained a fellowship at Lincoln College and in January 1887 was appointed to the Chair of Biology at the University of Melbourne.  Sir Baldwin Spencer proved an able administrator, a capable and enthusiastic teacher and an explorer and research worker of a high order in Aboriginal matters.

In 1894 he joined the expedition to central Australia led by W. A. Horn and that year, in Alice Springs, he met F. J. Gillen, with whom he was to do so much in studying and writing about the Aborigines.  The earliest notable joint publication was The Native Tribes of Central Australia (1899), a book which created a considerable stir in the scientific world and was hailed as a sound and remarkable piece of research work.  Subsequently his field work with Gillen was extended to the northern part of South Australia and as far as Borroloola near the Gulf of Carpentaria, N.T., and this led to Northern Tribes of Central Australia (1904).  In 1912 he accepted the position of Chief Protector of Aborigines for the Commonwealth and in that capacity he explored little-known territory; one of the results was The Native Tribes of the Northern Territory of Australia (1914).

Sir Baldwin Spencer did not confine his interests and activities to the University, though during 1904-11 he was president of the Professorial Board at a time when there was no paid Vice-Chancellor.  He did valuable work for the Royal Society of Victoria, the Field Naturalists Club, the Australasian Association for the Advancement of Science, the Royal Humane Society of Victoria, the Victorian Artists’ Club and the Victorian Football League.