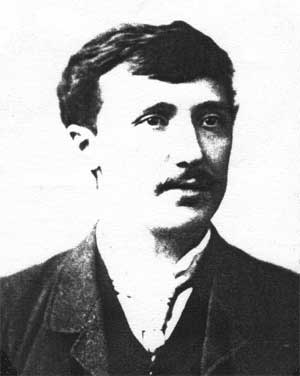 Arrived with his father in Port Adelaide, S.A. on the Helene, which left Hamburg on 22 October 1858 and arrived in S.A. 26 January 1859. The shipping list gave John Staer's age as 8 and gewerbe (birthplace and residence) as Skyren (but this probably only covered place of residence previous to sailing to Australia). His mother and five younger brothers and sisters arrived two years later. On the shipping list his father was shown as a tailor. Family records show that he was born at Crosser (correct spelling probably Krossen) 25 November 1850. If the assumption that the correct spelling is Krossen, then this places it near Frankfurt a. Oder, some 100 km east of Berlin. He died at the State Hospital and Home, Lidcombe, Sydney, N.S.W. 25 July 1933.

Information which he gave to his family in his later years was that he had lived in Adelaide for about 27 years, then in Melbourne for 4 years and from then on in NSW.

That indicates that he probably came to NSW around 1890 or the early 1890s, and this agrees fairly well with other information such as an application for naturalization dated 21 August 1911 in which he stated that he had been in NSW 19 years. A reference to residence in W.A. is rather vague but there is no doubt that he visited that State for seed collection. He collected the type of E. marginata var. staeri on King River Road, near Albany, in August 1911. This variety was subsequently raised to species rank by Kessell and Gardner in 1924.

John Staer and Sons were listed as nurserymen of Hornsby, outer Sydney, 1901-15; later John Staer was given as a nurserymen of Blackheath, in the Blue Mountains west of Sydney, 1921-26. It is considered that W.V. Fitzgerald (q.v.) of W.A. was a silent partner of Staer's nursery and seed business.

At the turn of the century all four children of his marriage lived in the Sydney area, three at Hornsby (of which two were sons).

Eucalyptus staeri (Maiden) Kessell & C. Gardner (1924)
is named in his honour (he is also collector of the type)

[When Botanists of the Eucalypts was written the main information about John Staer was provided by R.D.Royce to Mrs S.G.M. Carr, Then in 1986 a break-through came when Mrs A.S. George was able to advise the author of the address of Mrs G Wood, a great-granddaughter of Staer. Most important Mrs Wood was able to supply the shipping list of the Helene on which he came to Australia and the date and place of his death.]

Pers. comm. Eichler, Hj., Dr. with answers to his inquiries from German authorities as to the location of Skyren.