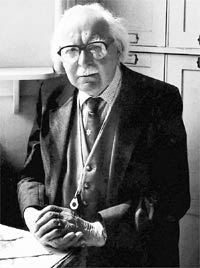 Professor William Stearn, who died aged 90 in May 2001, was one of Britain's most eminent botanists; his contribution to his subject was once compared to that of Robert Brown, Darwin and the Hookers.

During a career based first at the Royal Horticultural Society, then at the Natural History Museum, Stearn wrote some 470 books, articles and monographs, ranging from detailed studies of plant genera, through histories and biographies, to books on botanical taxonomy, many of which have become standard works of reference.

Stearn was a mine of information on classical plant nomenclature, botanical history and illustration, and the lore and language of plants. In all his writings, he combined scientific rigour with practical relevance for the keen amateur gardener.

Perhaps his most important work was Botanical Latin (1966), an essential guide to the subject and an inexhaustible reference source for botanists and bibliographers. This was followed by Stearn's Dictionary of Plant Names for Gardeners (first published in 1972), a more easily digestible compendium designed for the amateur plantsman. Among other fascinating snippets, it revealed that the nasturtium derives its name from the Latin for "twisted nose", due to its pungent taste.

During the early 1950s, Stearn was responsible for drawing up the first draft of the international Code of Nomenclature for Cultivated Plants, which supplemented the existing Code of Botanical Nomenclature, and introduced the terms "cultivar" (for a variety either raised or maintained in cultivation) and "grex" (for a group of hybrids of common parentage).

Cherubic-looking with a froth of white hair, Stearn was a delightfully unassuming man, and was held in great affection by all who knew him for his great generosity with his time. At one time his entry in Who's Who listed his recreations as "gardening, walking", until his family changed it to "gardening, talking". It came as a surprise to many who met him to discover that despite his amazing erudition, Stearn was almost entirely self-taught.

William Thomas Stearn was born in Cambridge on April 16 1911, the eldest of four sons of a coachman. His interest in natural history began during school holidays on an uncle's farm in Suffolk, where he started to look at wild flowers while keeping an eye on his uncle's cows.

On leaving Cambridge High School, he was unable to go to university as his widowed mother lacked the means to pay for it. Instead, he became an apprentice bookseller at Bowes and Bowes in Cambridge, and taught himself about botany in his spare time. He joined a weekly mutual improvement group, spent his lunch hours in the University Botany School and attended evening classes in German and bibliography.

Stearn published his first paper at the age of 18, on Peronospora Corollae, a fungus disease that distorts campanula flowers. Thanks to his keen-eyed observation, the disease was literally nipped in the bud.

Before long, he caught the attention of E A Bowles, the celebrated Enfield plantsman, who recommended the 22-year old Stearn to the Royal Horticultural Society as a successor to its librarian, H R Hutchinson, who was due to retire in 1933.

At the RHS, Stearn continued his studies, learning Swedish and using his annual leave to visit botanical collections in Europe. Within a few years of his appointment, the RHS Library took delivery of the largest bequest of books it had ever received - from Reginald Cory - and Stearn took on the task of cataloguing the works. These early years at the RHS also saw the publication of his first detailed botanical monograph, Epimedium and Vancouveria (1938), and Lilies of the World (1935), a monograph ostensibly by Drysdale Woodcock and John Coutts, but which was largely written by Stearn.

After serving in the RAF in Britain, India and Burma in the Second World War, Stearn returned to the RHS, moving into the library while searching for somewhere to live.

Just before the war, the director of Wisley, Frederick Chittenden, had taken on the job of editor-in-chief for a new RHS Dictionary of Gardening. As many botanists had subsequently been called up for active service, Chittenden wrote many of the articles himself. When he died in 1950, it fell to Stearn to co-edit and complete the work. He wrote entries on more than 500 plants, completing the fourth volume in just six months and becoming, as he recalled "a peculiar authority on plants from 'So-' onwards".

In 1950, The Art of Botanical Illustration was published in the Collins New Naturalist series, and long remained the standard history of the subject. Collins had managed to commission Stearn and Wilfrid Blunt separately to write the work; when the confusion was discovered, it turned into a collaboration, though it was Blunt's name that appeared on the title page with Stearn's contribution acknowledged in the preface. Stearn's role was belatedly recognised in 1994 when he revised it for a new edition.

In 1952, Stearn represented the RHS at the International Botanical Congress at Stockholm, with proposals for a new Code of Nomenclature for Cultivated Plants. While the delegates were sightseeing in Stockholm on the final day of the conference, Stearn set to work to produce a first draft, ready to hand out to botanists on their return to the hotel.

By the time the first edition of the Code was published in 1953, Stearn had left the RHS for the Botany Department of the Natural History Museum, where he worked for the next 14 years. After his retirement, he wrote The National History Museum at South Kensington (1981), a comprehensive history of the Museum from the 1750s to 1980.

After retiring from the museum in 1976, Stearn took up the post of editor for the Greek botanical journal Annales Musei Goulandris, a job he continued to perform until the age of 88.

Among Stearn's botanical publications, he collaborated with E A Bowles on learned articles on Allium, Lilium, Paeonia and Anemone. He revised Berberidacae for the European Garden Flora, collaborated with Hiroshi Hara and L H J Williams on An Enumeration of the Flowering Plants of Nepal (three volumes 1978-82), and with Peter Davis on Peonies of Greece (1984).

In 1993, he and his wife Ruth translated and augmented Helmut Baumann's Greek Wild Flowers, a book which reflected one of Stearn's areas of expertise - the interaction between the ancient Greeks and plants, in folklore, mythology, medicine and art.

In his later years he wrote introductions or texts for works on botanical illustration including The Australian Flower Paintings of Ferdinand Bauer (1976), An English Florilegium (1987) Hooker's Finest Fruits (1989) and Flower Artists of Kew (1990).

His works on the history of botany include a collaborative biography of John Lindley, the former Secretary of the RHS, published in 1999 to mark the bicentenary of his birth, and A Bicentenary History of the Linnean Society (with A T Gage, 1988).

In 1976 he was awarded the Linnean Society's Gold Medal for services to taxonomic botany and for his 170-page introduction to the facsimile of Linnaeus's Species Plantarum (1957-9). No other botanist, it was said, had the knowledge of botanical history and the linguistic ability in Latin, German, Dutch and Swedish needed to write it, and the preface has become a classic study of the great naturalist.

In his final years, Stearn returned to the genus Epimedium, the subject of his first book, and was working with Brian Mathew on a new study of the genus when he died, continuing to examine specimens in his hospital bed. He referred to this new work as his "botanical swansong".

Stearn served variously as president of the Linnean Society, the Garden History Society, and the Ray Society. Among numerous honours, he was awarded the Victoria Medal of Honour by the RHS and the Engler Medal by the International Association for Plant Taxonomy. He was an honorary professor of Reading University and a visiting professor at Cambridge University's Department of Botany and Agricultural Botany from 1977 to 1983.

William Stearn married, in 1940, Ruth Alford; they had a son and two daughters.