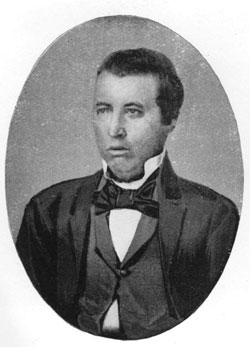 He migrated to South Australia, possibly as a seaman, in 1836. In 1840 he moved to Sydney and set up business as a collector of natural history specimens. He also visited New Zealand and New Caledonia, went to England in 1852 and later returned to Queensland.

Frederick Strange was a collector with Charles Sturt on the Murray. He collected for zoologist John Gould at the Flinder Range, Lake Albert and the River Courong in South Australia, also in southern Queensland, and in northern New South Wales where he discovered Prince Albert's Lyre-bird. Strange long coveted the position of primary collector for Gould even before Gilbert's death. He kept bower-birds in captivity, and watched them making their bowers.

Botanist Walter Hill worked with Frederick Strange in 1854 and sailed along the Moreton Bay District and in company of Captain G.E.V.Maitland of the Ketch "Vision" anchored at South Percy Island, (S/E of Mackay Qld), on 14th October 1854, next day Frederick Strange, and his men including Gittings, Shinks, Spurling and a Sydney aboriginal named Deliapee along with Botanist Walter Hill landed on the Sth Percy Island and Walter Hill went of on his own and when he returned to the beach, Deliapee shouted at him to run for the boat as 6 aboriginals had killed the other four men and the Captain refused to recover the bodies as they were outnumbered and Walter Hill returned to Sydney and later the Aborigines were captured and put on trial at Sydney, found guilty and the 6 aborigines were returned to Brisbane, Moreton Bay NSW (Qld) where they were hanged.

We know that Strange was semi-literate from a note he sent Gould and that he mismanaged his affairs and was financially incompetent.

The genus Strangea Meissner, in the family Proteaceae, honours this collector.