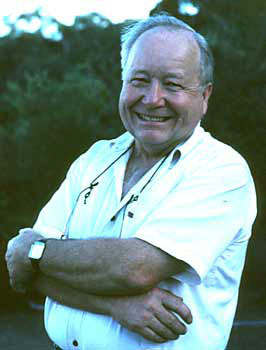 Heinar was private, shy, quiet and gentlemanly by nature. Although not at ease in large groups, in a one to one situation he was ever willing to share his passion for plants, particularly mosses, and to help with identifications and exchange of collections with anyone sharing his interests. He loved fieldwork and many overseas visitors to Canberra over the years were able to share days in the field with him.

His family, too, shared many working expeditions with him with many roadside stops. As a growing boy, his son Arvid saw many interesting places in Victoria and the Brindabellas on excursions or holidays spent with his father in the bush. Heinar’s two daughters, Arlene and Mirja, and his wife Lina joined in with the activities. Mirja used her skills as an artist to illustrate the covers of some of his Exiccatae and help with other illustrations for his publications. His wife Lina gave him considerable support and encouragement in all his endeavours and shared his love of travel. Hence they travelled widely in North America, Japan, the Philippines, and Europe. It was on those expeditions, meeting many overseas bryologists that Heinar realised the recognition they gave for his knowledge and the value of his collections.

Although he lived most of his life in Australia, Heinar felt particularly at home in Europe in his latter days after re-establishing his connections with relatives in Estonia where he was born in Turtu in 1938. The war years took their toll when as a young boy he lost his father in the Estonian Air Force. His early years were spent with his mother, grandmother, and brother under war conditions and the post-war period under the Russians. Finally in 1950 the family fled to Germany where Heinar began his education. Later in 1950 the family migrated to Australia, to Seymour in Victoria where he remained until he completed his schooling and moved to work in Melbourne.

His working career was quite varied. He began at the Bureau of Meteorology in Melbourne (1959-1961). In 1961 he moved to Papua New Guinea where he worked (1961-1963) in the Department of Forests at Bulolo. In 1964 he moved to the Bulolo Forestry College where he was employed in surveying and planning roads for the growing forestry industry. His travels in the forest and being surrounded daily by rich tropical vegetation, as well his keen observation and curiosity, soon gave him a love of botany, particularly tropical plants and later the cryptogams. He began teaching botany at the Forestry College and in 1971-1972 worked in the Division of Botany at Lae. In 1972 he moved to Canberra to work in the Herbarium, National Botanic Gardens (CBG). In 1993 this became part of the Australian National Herbarium, Centre of Plant Diversity Research. (CANB) where Heinar remained, except for a short return to the Forestry College in Bulolo as a visiting lecturer in 1981-83, until his retirement in 2000.

Whilst in New Guinea he corresponded with a pen pal Angelina (Lina) in the Philippines. Finally in 1965 he met her in Manila where their relationship blossomed and, after a whirlwind courtship, they were married there. His years in Papua New Guinea gave him an understanding and rapport with the indigenous people there. Thus when he returned in 1981 –1982 as a lecturer, he was able to make significant collections with the help of the local population. Some of these collections were sent to Helen Ramsay for cytological studies.

During his years in Canberra he studied part-time for a degree in Applied Science (University of Canberra) and later, with Helen Ramsay as supervisor, he completed a Masters degree at the University of New South Wales working on a revision of the Meteoriaceae in Australia. In his early years in Canberra, Heinar began amassing herbarium collections of cryptogams. Initially duplicates were sent overseas to eg. Helsinki, New York or Leiden for identification by experts. Gradually Heinar became more expert in identification himself and was able to place names on most of his collections. Apart from those from Papua New Guinea, Heinar’s collections were made when he travelled widely in Queensland, New South Wales, Australian Capital Territory, Victoria, Tasmania and also recently in Vanuatu. As well as sending duplicates to many herbaria, including H, L, NY and MO, he made a series of Exiccatae for distribution consisting of 17 fascicles representing 500 numbers. During his time at Canberra he built up the cryptogamic collections at CBG (now in CANB) from 14 packets to what finally, at his retirement, is the largest collection of cryptogams in the Southern Hemisphere. The collection now stands at ca 65,000 with approximately equal numbers of mosses and lichens, the rest being liverworts and fungi.

A close friendship and many field excursions with his colleague Jack Elix were the basis for many of the lichen collections and a number of publications. When close to death Heinar was relieved when Jack agreed to help complete his unfinished publications, particularly the revised catalogue. Other colleagues will also help.

Apart from his connections with Papua New Guinea, Heinar had a real interest in the offshore islands close to Australia eg. Norfolk Island, Christmas Island, Lord Howe Island. His book on the Mosses of Norfolk Island is the result of his work there. Unfortunately others which were anticipated were not completed. In recent years he also became interested in Vanuatu where he worked with the indigenous botanists and tried to establish an interest in and appreciation of the bryophytes and lichens of these Islands. A catalogue of these is in preparation and will be published.

Heinar had a remarkable ability for cataloguing information and references. He was very patient working away at this in his own time. Once these data were accumulated with help from Judith Curnow, they were entered into the computer and ABRS was persuaded to publish it. This catalogue (Streimann & Curnow 1989) was a milestone in our knowledge of Australian mosses, bringing together in a compact volume, the names, publication data and distribution by state for all the known Australian species. It included a vast number of early publications and has provided so much useful information and saved many hours of library research for those involved in Flora writing. The increased activity in moss research both in Australia and worldwide since then has necessitated the production of an updated version. Heinar had prepared a draft manuscript, which was almost complete at the time of his death. It will be published in the near future. In addition, he has an extensive publication list including over 50 papers and 17 Exiccatae and 2-3 books. The revision of the families Meteoriaceae and Hookeriaceae are a taxonomic contribution to the Flora of Australia.

The death of Heinar Streimann on 29th August 2001 has left a gap in the bryological community. His contributions to Australian bryology have been outstanding. He will be sorely missed by many of his colleagues scattered worldwide. Heinar will long be remembered for his passionate love of the cryptogams and his ability to impart that knowledge to those interested enough to listen.

STREIMANN, H. 1969. Microphotographs of the wood of some commercial timbers of the Territories of Papua and New Guinea. Gov. Print., Port Moresby.