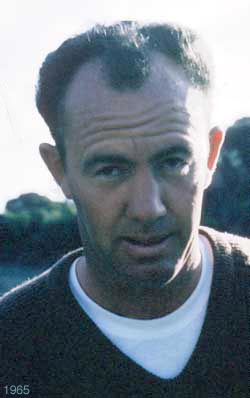 Peter's professional life commenced in 1954 when he has was engaged as the first horticultural apprentice in the ACT, working with City Parks in the Dept of the Interior.

It soon became evident that Peter had a special horticultural gift and in 1957 he topped his graduation class at the Canberra Technical College with a mark of 93%.

During the 1960's Peter participated in collecting expeditions for the Canberra Botanic Gardens, later to become the Australian National Botanic Gardens.

In 1968 Peter was appointed as the City Parks Horticultural Extension Officer with responsibility for apprentices and promoting horticulture to the Canberra Community.

It was during this period that his passion for fostering and developing young people first became evident. At any one time he was responsible for the management of up to 30 young apprentices.

Peter and his apprentices were involved in the development and planting of many of Canberra's important landscapes including City Hill, Regatta Point, Commonwealth Gardens, Aspen Island and the English Garden in Yarralumla. He once told me that he had his apprentices dig in 50 cubic metres of German Peat into the English Garden. Apparently the peat had been brought to Australia as German war reparations following World War 2 and Peter put it to good use.

Peter also became a media personality during this time, representing the public face of City Parks. He appeared regularly in the ‘Southern Gardener' in the early days of Canberra TV and had a radio gardening talk back show on the ABC'. He appeared in the shows “In Your Garden” and “From Pot to Plot” and wrote articles for Better Homes and Gardens. He was also in demand as a judge at Horticultural Shows and was recognized as an expert on growing and judging chrysanthemums, roses and camellias.

In 1981 Peter's management and people skills were recognized with his appointment as Parks Manager for the National Area a post he held until his retirement in 1998. This position included responsibility for the horticultural maintenance of the grounds of Government House, the Prime Minister's Lodge, old Parliament House, National Rose Garden, the Native Garden at the National Gallery of Australia and Commonwealth Gardens. His unflappable nature, diplomacy and a wicked sense of humor served him well in dealing with some very large egos during this time.

Peter traveled a great deal during this time, usually with his life long friend Lennie Dunne with whom he visited many of the great gardens and floral displays of the world. It was probably from these experiences that the original idea for what we now know as Floriade was conceived. Working closely with his colleague, landscape designer Chris De Bruine, a proposal for a grand floral display to celebrate the Bicentenary was developed. Following extensive trials in 1987 to select suitable species and determine flowering times, the first Floriade was presented in 1988. In following years, under Peter's stewardship, the festival grew into Australia's premier celebration of flower and colour.

Following his retirement in 1998 Peter continued his engagement with horticulture. He hosted a number of overseas trips to the great gardens of the world with Mark Carmody. With Robert Boden, he undertook an assessment of all trees in Government House and more recently was the advisor to Conservator for Flora and Fauna on tree protection matters in the ACT.

Peter also had a continuing interest in the link between the Yarralumla Nursery and the Lindsay Pryor National Arboretum, which he helped to plant.