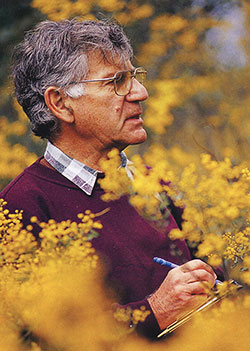 As a child Terry Tame was influenced by his bushwalks in the Blue Mountains and by a close neighbour at the time, naturalist Dr Edwin Chisholm, beginning a life-long interest in the Australian flora.

Terry Tame grew up in Sydney and the Blue Mountains, and trained as a manual arts teacher at Sydney College. He excelled at mathematics, and mostly taught Engineering Science throughout his teaching career. He was appointed to Muswellbrook High School in 1956, and while living in the upper Hunter Valley, Terry explored the vegetation of the region. The family moved to Jewells, Lake Macquarie, in 1985 when Terry began teaching at Warners Bay High. He retired in 1991, becoming very actively involved in botanical projects, particularly at the Hunter Region Botanic Gardens, before finally moving to Bethania in Queensland in 2004 where he remained active for many more years working on projects such as a rainforest key.

Terry's enthusiasm with plants was shared on many country trips with his wife Eileen (Tup) and son Allan. Tup recalls many holidays revolved around collecting specimens when they went "wattling". Terry was a keen educator, bushwalker, photographer and artist (pen and ink, oil paintings) of landscapes, nature and architecture/buildings. Terry had a wide range of interests, including geology and geomorphology, soils, indigenous culture and local history. The skills he developed from his other interests enabled Terry to develop a holistic approach to his work on plants and acacias in particular.

Terry decided he wanted to develop plant identification skills, and he chose Acacia as he believed they were an essential component in most Australian ecosystems. In 1974, he set up a microscope and a few other things in the spare bedroom, and began attempting to identify specimens he collected in the Hunter Valley. In 1975 he started sending specimens he had identified to Dr Mary Tindale at the Royal Botanic Gardens Sydney, for checking. As his skills developed he began to collect Acacia specimens from across the Hunter Region and ultimately he travelled extensively throughout New South Wales and Victoria to study plants in the wild. He collaborated with botanists (particularly Bruce Maslin, Phillip Kodela, Mary Tindale and Barry Conn) and was associated with various Acacia projects (see below), and while doing so he provided and curated herbarium specimen collections. Terry became a "walking library of knowledge on Acacia" (Cowley 2001: 70), and this knowledge extended beyond taxonomy and identification, but also covered ecology and biology, uses and gardening with wattles.

For a period of about a decade or so from 1988, Terry was a member of the Acacia Study Group, part of the Australian Native Plants Society (Australia) Inc., and contributed a number of notes to the Society's newsletter on topics such as propagation techniques for Acacia and interesting species in cultivation.

Terry's extensive knowledge of Acacia resulted in numerous descriptions and notes, specimen collections and photographs, and included the expertise to distinguish new taxa. He was a talented illustrator producing hundreds of line drawings showing diagnostic features useful for identification. Much of this work features in the comprehensive book he authored and illustrated, Acacias of Southeast Australia (published 1992), and provided the basis for large parts of WattleWEB (released 1999). Terry's Acacia drawings were not only published in his book but also illustrate protologues (Conn & Tame 1996, Kodela & Tame 1999), floras and other references; for example, he generously gave permission to use his illustrations and colour photographs on World Wide Wattle (Bruce Maslin, pers. comm., February 2019).

In the 1990s and 2000s, Terry contributed to the Flora of Australia project as an author of treatments in the Acacia volumes (published 2001) and assisted with the compilation of an interactive Lucid key WATTLE: Acacias of Australia (first published in 2001).

As a skilled mathematician and academic Terry was able to readily grasp the developing technology of the time using Delta and later Lucid databases and, without access to institutional statistical packages, wrote his own program to perform the statistical analyses required for studies such as the revision of the Acacia uncinata complex (Conn & Tame 1996).

Terry's extensive field experience and interest in local history enabled him to provide expert knowledge on the distribution and status (e.g. natural distribution versus introductions and naturalised records, conservation status, etc.) of a number of Acacia and other species and outlying populations, particularly in the Hunter Valley region. He became something of a go-to person for advice/information on the flora of the Hunter Valley and was a founding member on a subcommittee of the Hunter Region Botanic Gardens researching and databasing rare plants and vegetation communities in the region. Out of this group, assessments of endangered ecological communities were compiled which formed the basis of legal listings (e.g. Peake et al. 2002), as well as production of the first listings of regionally significant plant species for the Hunter (Bell et al. 2003). During the 1980s, Terry prepared one of the earliest overall assessments of the vegetation of the Hunter Valley (Tame 1984a) and produced numerous unpublished lists, notes, reports and maps (e.g. Tame 1981, 1984b, 1997, 2003; Tame et al. 1997). (Stephen Bell, pers. comm., February 2019).

While in Newcastle Terry became an active volunteer at the Hunter Region Botanic Gardens at Heatherbrae (north of Newcastle), where he was largely responsible for establishing a living collection of acacias of the Hunter Region (Acacia Garden) and the Hunter Region Botanic Gardens Herbarium (established in 1992; dedicated to Terry Tame in 2018). As the curator of the botanical collections he realised the usefulness of an interactive key to rainforest plants, leading to a collaboration with Gwen Harden and other rainforest authorities to import the information from their well-known "Red Book" (rainforest trees and shrubs) and "Green Book" (rainforest climbing plants) into producing such a key (Harden et al. 2016). He did much of the original setting out and scoring for the species and sections included on the USB and prepared the diagrams and maps for the various rainforest types, as outlined in the key's "Meet the Authors" section.

Terry Tame's contributions and legacy to botany include plant specimen collections and herbarium curation, the publication of new Acacia species, flora treatments and botanical references, detailed botanical illustrations and plant identification tools including electronic interactive keys for the significant groups Acacia and rainforest plants. He generously shared his knowledge of plants and skills with the community through collaborations on botanical projects and his work at Hunter Region Botanic Gardens. 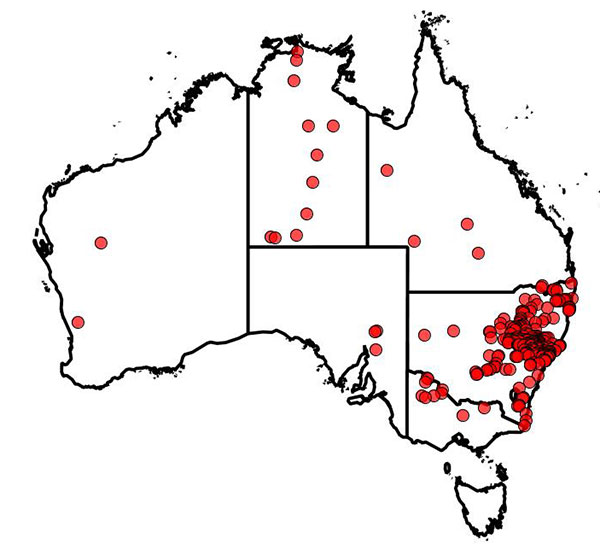