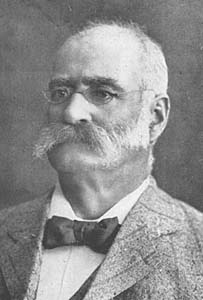 Born in Alnick, Northumberland, England, in May 1840, died in Adelaide, South Australia, on 20 September 1901.

Appointed Elder Professor of Science at the University of Adelaide in 1875, teaching botany, zoology and geology. Collected from the last vestiges of the Adelaide Plains flora, and conducted a detailed survey in the South East (1882-1883). He wrote numerous papers on South Australian natural history, a Census of the Flora of South Australia (1880) and a Handbook of the Flora of Extra Tropical South Australia (1890). He published jointly with Mueller on the results of the Elder Exploring Expedition (see Helms) and participated in the Horn Expedition (1894). The botanical report of this expedition (1896) listed almost 500 plants, mainly from the vicinity of Uluru [Ayers Rock], Kata-Tjuta [Mt Olga], the George Gill Range, MacDonnell Ranges and the Finke River, Northern Territory. His herbarium at ADU was transferred on permanent loan to AD in 1954. A few duplicates are in K, MANCH and MEL.