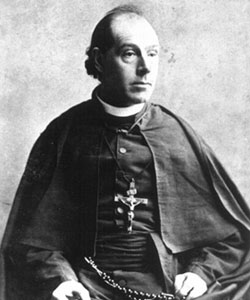 As a 14 year old he worked for The Times and in 1848 joined the Roman Catholic Church. Because he suffered ill health he moved to Tasmania in 1855. Julian had completed his theological studies by 1856 and was ordained in 1857. He was given a parish at Penola in south-eastern South Australia. In 1866 he helped to found the Sisters of St Joseph of the Sacred Heart at Penola.

He changed his name from Woods to Tenison-Woods in the 1860's and in 1862 published his first book 'Geological Observations in South s Australia'. At about the same time his first botanical work was done for the Flora of Australiensis (1863-1878), supplying a list of plants for the Ninety Mile Desert in South Australia. He was appointed Director-General of Catholic Education and held this position for four years. Between 1867 and 1870 he was an editor of several religious magazines some politically orientated. In 1871 he was eased out of Adelaide and until. 1883 he conducted missions and retreats in New South Wales, Tasmania: and Queensland. In Brisbane on the 15th June 1874 he founded the Sisters of Perpetual Adoration

Because he often clashed with his superiors in 1883 he relinquished parochial work to follow his scientific career. That year he was asked to report on the geology and tin-mining of Malay States. He went on travelling to Java, Borneo, Siam and Japan. In 1885 he surveyed the mineral potential of the Indian Archipelago. He also surveyed coal resources and tin-miners in Queensland. Tenison-Woods is recorded ; collecting plants in central Queensland from 1881 to 1886.

Tenison-Woods published over 150 papers in many journals and transactions. In 1887, his health ruined he returned from the Northern Territory to Sydney. He died of paralysis leaving his 609 pound estate to 'Mrs Abbott' the founder of a refuge for unmarried mothers (now St Margaret's Hospital, Sydney).

He is commemorated by Mt Tenison-Woods at the D'Aguilar Range north-west of Brisbane.

Map of collecting locations from AVH for Tenison-Woods: