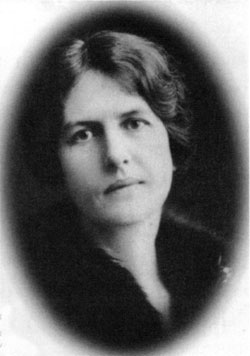 Estelle Thomson, naturalist and wildflower painter, was born in Glasgow, Scotland, daughter of George Comrie-Smith, photographer and artist, and Ethel, née Thomson. Both her parents were keen naturalists and Ethel later became an expert on Queensland birds. Estelle's early love of nature was inspired by family visits to the Scottish Highlands and the Lakes District of Cumberland.

She was educated at Calder House School at Seascale, Cumberland, and later at a school of physical culture at Dartford, Kent. Estelle was a teacher of physical culture and eurhythmics before her marriage in Glasgow in 1917 to her second cousin, the Queensland surveying engineer Aubrey Frederick Thomson (formerly von Stieglitz), then serving with the Australian Army in Europe during the First World War.

In 1919, after the war, Estelle and Aubrey Thomson arrived in Brisbane, later to be followed by her parents. They settled on a farm, Wombo, at Eight Mile Plains south of Brisbane, where they raised poultry and small crops until forced to abandon the venture in 1923. The then unspoilt bush of Eight Mile Plains made a lasting impression on Estelle who was to spend the rest of her life awakening public appreciation of Australian wildflowers, while also raising her four children. An active member of the Queensland Naturalists' Club from the 1920s, she contributed flowers, paintings and drawings to its annual wildflower shows, and was vice-president in 1929-30 and president in 1930-31. Estelle was also a member of the Arts and Crafts Society of Queensland, the Lyceum Club and the Brisbane Women's Club.

Estelle Thomson is best remembered for her publications. Recognising the need for a popular guide to Queensland wildflowers, she produced Flowers of Our Bush, published in 1929 by the Read Press, Brisbane, and distributed for many years by Barker's Bookstore. This 'delightful little volume' describing and illustrating coastal species, was intended as the first of a short series on Australian wildflowers, but no further volumes could be issued in the ensuing Depression years. From 1929

to the 1930s Estelle ran a weekly 'Wildflowers' column in the Brisbane Courier, illustrated by her own line drawings. This was followed by her column 'Nature's Ways' in the Telegraph, maintained until her health began to fail in about 1950. She also lectured at women's clubs and schools, illustrating her lectures with delicately hand-coloured lantern slides, which are now held by the John Oxley library, Brisbane.

During the 1940s Estelle Thomson gave a series of children's talks on wildflowers on the ABC and produced a series of paintings of poisonous plants for the University of Queensland's Medical School. A friend of the Queensland Government Botanist C.T. White, she deposited specimens in the Queensland Herbarium, including some collected on the Granite Belt and at Caloundra where she had a holiday house. Estelle Thomson died of heart disease in Brisbane on 6 September 1953.