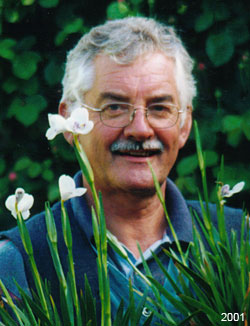 Peter emigrated from the UK as a young boy after WW2 in 1952. Fortunate to be brought up on an estate farm in the county of Oxfordshire, he fondly remembers his boyhood adventures with his ‘zoological’ father in and around the woodland and lakes of ‘Ditchly Park’ whose landscaping was originally laid out by the pre-eminent ‘Capability’ Brown.

Another field of interest was to complement Peter’s natural history disciplines when he married into a ‘botanical’ family in 1968.

As soon as he began work as a commercial machines mechanic at fifteen he purchased his first ‘close-up’ camera so others could share the discoveries and delights Tasmania and in particular the Mersey Valley had to offer, his technical expertise were encouraged and enhanced by critical analysis of his fellow associates within the field of wildlife photography, something he has always appreciated.

Over the years Peter has lost count of the many audio-visual lectures (conference papers) and guest speaker appearances he has presented, especially within his two main areas of specific knowledge, ‘The Native Orchids of Tasmania’, in reference to the recently published text book of the same name, which he shared co-authorship and Raptors, or Birds of Prey, having held a state Rehabilitation license and National bird-banders Authority (Birds Australia) for many years.

In the beginning of 2000, Peter decided to ‘retire’ from his horticultural position as Manager of Parks and Reserves for the Latrobe Council to begin a new challenge, that of sharing fulltime with others of like-mind, the often secretive and hidden Natural treasures of the Mersey Valley and North West region of Tasmania.

As a contribution and acknowledgement Peter has made in the field of orchidology, spanning some forty years, David Jones, Principal Researcher and Plant Scientist with the Centre of Plant Biodiversity Research at the National Herbarium, Canberra - in publishing and naming a new species of Spider Orchid, Caladenia tonellii ventured further to record:

‘…named after Peter Tonelli, professional horticulturalist and enthusiastic student of flora and fauna, who discovered this species,’

Peter sits well with this appraisal and endeavours to encourage others in the preservation of natural sites of scientific interest.