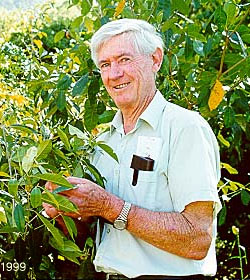 He studied agriculture at Gatton Agricultural College (1947-1948) and furthered his studies in Science (Botany) at the University of Queensland in the early 1960s.

Geoff worked for many years (1949-1980) with Dr. Len Webb in the Rainforest Ecology Unit of the CSIRO Division of Plant Industry. Geoff's earlier work had a strong focus on collection of plant samples for analyses for the Australian Phytochemical Survey. From the mid 1960s, his work with Len Webb focussed on Rainforest Ecology. During this period, Geoff had numerous joint publications on this topic in particular, with Bill Williams (of CSIRO Tropical Pastures), who was a specialist in numerical analysis techniques. Geoff's outstanding ability to identify rainforest plants, particularly seedlings, in the field, made this research possible. During the 1970s, the work of Len Webb and Geoff Tracey, provided the scientific basis for a number of conservation campaigns across Queensland. In 1975, the 15 North Queensland vegetation maps by Geoff and Len were published by CSIRO.

In 1989, Geoff was instrumental in setting up the shire-based environmental rehabilitation tree planting scheme to employ and re-train timber workers who lost their jobs following World Heritage Listing of North Queensland rainforests in 1988. Geoff's earlier interest in re-establishing rainforest by small plantings, as at the Long Pocket Laboratories in Brisbane in the earlier 1970s, was followed by his role as the scientific coordinator of a scheme known as the Wet Tropics Tree Planting Scheme and was adviser to the N.Q. Joint Board (now N.Q. Afforestation) comprising shire chairmen from the twelve local government authorities covering N.Q. Wet Tropics Region, who took over the Scheme in the mid 1990s. Geoff retained a personal interest in and provided advice to the Scheme.

An interview with Geoff, explaining some of his deeply held beliefs, appears as: "The Field Botanist: John Geoffrey Tracey" in: Borschmann, Gregg (ed.)(1999) The People's Forest: A Living History of the Australian Bush. Blackheath, N.S.W.: People's Forest Press, pp.218-221.