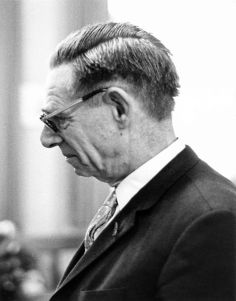 Professor Cornelis Gysbert Gerrit Jan van Steenis, Director of the Ryksherbarium at Leiden, the Netherlands, from 1962 till 1972, died on the 14th of May last at the age of 84, apparently after a short illness. Although officially retired from academic duties for many years, as Director of the Flora Malesiana Foundation he remained scientifically active till the very last. It is therefore no empty phrase to describe his passing as a genuine loss to the botanical world.

Shortly after World War II, while still employed at Bogor, Indonesia, by the then Dutch colonial administration, he visited a number of herbaria in Australian state capitals in order to arouse interest in collaboration with his newly started Flora Malesiana project. He made a second trip to Australia, together with his wife, in 1973, a year after his retirement. New Zealand was also included and this time full attention was given to the Australasian flora, which they found fascinating. Several ASBS members will remember them from that time as they travelled from state to state.

There is no doubt that Van Steenis will be long remembered in Australia through his writings as a plant-geographer with a wide range of interests, who paid particular attention to the Indo-Pacific area. Furthermore, as initiator of Flora Malesiana, and as its General Editor for about forty years, he has had much influence on those planning the much younger Flora of Australia. Many monographs and revisions of plants in the Southwest Pacific and Southeast Asian regions were inspired or stimulated by him, and these will continue to influence our floristic publications for many years to come.