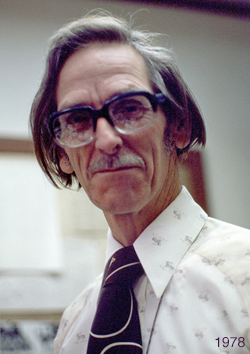 Doug spent his childhood, from the age of seven, in the 'National Childrens Home' on the Isle of Man. He left the Home at the age of 14 for a labouring job but soon ran away and lived rough on the streets of London during the Depression. He joined the Royal Air Force as a fitter and saw service in the Middle East during the Second World War. He spent eleven years in the RAF, then tried his hand at farming, then emigrated with his young family to Australia in 1958.

After a short time as a market gardener at Pialligo near Canberra he joined the Government Nursery at Yarralumla as a gardener in 1962 and studied horticulture at the Canberra Technical College. His keen interest in plants soon saw him working in the newly established Horticultural Research Unit of City Parks, located at Yarralumla.

In 1968 he transferred to the Herbarium of the Canberra Botanic Gardens (now Australian National Botanic Gardens) to help identify the herbarium specimens arriving from a major field trip to Western Australia. He remained with the Botanic Gardens Herbarium (CBG) for the rest of his working life. During the 1970s he developed a strong interest in lichens and by the time of his retirement in 1985 this was the major focus of his work.

After his retirement he continued his work on lichen classification, working closely with Prof Jack Elix in the Chemistry Dept of the Australian National University until the age of 78. During his retirement he travelled to Berlin, Paris, London, Denmark and Sweden studying lichens at various institutions.

He is survived by a wife, Eileen, a daughter and a son.