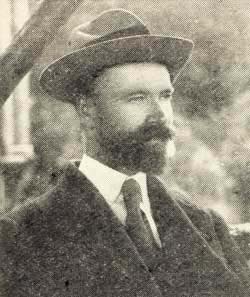 His father was in the diplomatic service and Gustav was trained at the Vienna University for a similar career. In 1899 he came to Melbourne to work in the Austro-Hungarian Consulate.

His agricultural training had made him a competent botanist and he soon joined the Field Naturalists Club of Victoria and was publishing papers on alpine flora. He married a fellow member of the club, Kate Cowle, resigned from the diplomatic service, moved to Tasmania where his wife's family lived, and began farming at Kindred.

He walked into Cradle Mountain with Dr Charles Sutton in 1909, and again in 1912 with pack-horses where he commenced building his chalet, to be known as Waldheim Chalet. Mostly built from local timber such as King Billy Pines by his own hands. On the death of his wife in 1916 he sold the farm and moved up the mountain, earning the title 'Hermit of Cradle Mountain'. His chalet had accomodation for 24 people.

His dead body was found on 6 May 1932 next to the motorcycle and sidecar at the foot of a steep slope on the track he had built to link the chalet with the plains below.