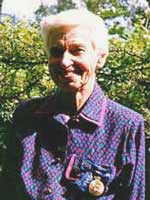 Gretna Margaret Parkin was a World War I baby. First child of Grace and Arthur Parkin, she was born in 1917 in Gretna, the Scottish village where her Melbourne father was a volunteer chemist in the munitions factory. Growing up in Melbourne's outer-suburban Surrey Hills, Gretna completing her schooling on scholarships at Methodist Ladies College, where she gained final-year honours and the botany exhibition and won a government scholarship to the University of Melbourne. Gretna graduated Bachelor of Science (BSc) in 1938 and Master of Science (MSc) in 1939. With a research scholarship, she completed her MSc research on wood anatomy in time to tackle a serious consequence of the January 1939 bushfires - preserving the huge quantities of dead standing Mountain Ash timber.

Gretna investigated wood-rotting fungi and timber-treatments for the Forests Commission of Victoria (FCV) but, unlike her male research colleagues and despite her lack of typing ability and typewriter, her classification was 'temporary typist'. Also unlike her male FCV colleagues, marriage - to forester Geoff Weste in 1941 - forced her resignation. Her continuing wood decay research in the University of Melbourne Botany School was interrupted when, in order to protect World War II troops from malaria, quinine was quietly removed from pessaries protecting women from pregnancy.

After combining nearly two decades of motherhood with some secondary school-teaching, Gretna Weste returned to the Botany School to teach mycology and plant pathology and undertake research. For her thesis on a root-rotting pathogen of wheat, Gretna was awarded a Doctor of Philosophy (PhD) degree in 1969, just as agricultural plant pathology was transferred to the Agriculture School. So Dr Weste turned her research attention to a root pathogen of Australian indigenous plants, Phytophthora cinnamomi, known to cause Jarrah dieback in Western Australia and newly detected in Victoria. Weste and her succession of postgraduate research students revealed how this alien water mould is dispersed and how it kills native plants. Their long-term investigations in national parks, extending well beyond her University retirement in 1982, revealed the cyclic nature of infestation. When Phytophthora cinnamomi has killed all susceptible plants, it too dies out, thereby allowing vegetation regeneration. But only species with seeds surviving dormant in the ground. Unfortunately, this excludes many rare and endangered species, some of which are endemic, so Weste's research increasingly focused on protecting endemic species from extinction.

Awarded a University of Melbourne Doctor of Science (DSc) degree in 1984 for her published papers and made a Member of the Order of Australia in 1989 for her scientific contributions, Weste was the foremost authority on this virulent plant pathogen in Australia. She advised government agencies, participated in conservation, botanical and plant pathology societies and conferences in and beyond Australia, and published prolifically, all the while continuing to undertake and supervise research on the ways and wiles of Phytophthora cinnamomi until shortly before her death in 2006.